We are happy that you can join us to celebrate the wedding of Katharine and Peter. In keeping with their wishes, the ceremony will not be long. But first a few words from the mother of the bride:

It is not often that two people can be both clear-eyed and in love. But that is surely the case here. Unlike most of the rest of us, Kathy and Peter know exactly what they are doing. Theirs is a serious decision, but this is not a solemn occasion. Rather it is a joyful one. I am sure I speak for us all in thanking Pete and Kathy for giving us so profound a cause for celebration. We also thank them for making so many of the wedding arrangements themselves.

In my position of officient, I would of course like to take some credit for this splendid match. After much thought, I have come up with the following: had I not attended Camp Tanager Lodge in 1947, then Kathy wouldnt have gone either. Then she would not have met Molly Mullahy. Then Molly could not have introduced her to Peter. Then.... but somehow I think that this couple had to meet, one way or another.

Yet I do want to acknowledge the importance of Tanager Lodge in this event. Its director, Tad and Ali, are very sorry not to be able to be here. The camp is nevertheless well represented among us--bridesmaids especially. And I believe that the Tanager spirit is as tangible here as it would be in the Adirondacks. We can almost feel the breezes and slap away the black flies. Those who wish can imagine all this happening underneath the Big Pine on Indian Point.

I asked the happy couple for a list of things that I didnt know about them. One was that Peter cares about animals more than about humans. I am sure he makes plenty of exceptions, particularly about people in this crowd. I also learned that Kathy did not know that reindeer are real animals until the age of 18. How she made this discovery was not indicated. I also learned that Peter loves to cook, as we will all see in less than an hour.

Then there the things I do know about Peter--like his affection for found art-- but especially about Kathy, whom I have known a bit longer. For instance that she always loved her little brother--I mean, once little brother--even when he was being irritating and obstreperous (one of her favorite childhood words). We have videos that corroborate this unlikely fact. Also that even Kathy could be a pain in the neck. Especially in the back seat of a car. It wasnt only Are we there yet? She would occasionally torment Jeff and blame it on others; You woke up him, she charged. Then she admitted that he was already awake: He blunk his eyes, she said. This was some time ago.

I dont want to embarrass Jeff, but I must recall that he once threw Kathys Cabbage-Patch doll out the window of a moving car. I mention this only because Kathy took the matter with great maturity. It was just sibling rivalry, she said. And hes only a baby. Kathy was about 5 at the time.

As Kathy grew older, she seemed remarkably unafflicted by doubt. She knew she wanted to attend public school, to study political science, to live in Philadelphia. And I am sure that she knows what she is doing today. Same for Peter. Incidentally, Kathy and Peters list includes the news that Kathy always knew that Pete was marriage material. It doesnt reveal what material he thought Kathy was.

Another thing I know about Kathy is that she can drive a truck. Also that she can run and swim great distances. I find these very impressive. Likewise that Peter can make art out of junk.

I wish I could say that my generation has bequeathed a tranquil world to its successors. I wont belabor the point--this is a joyous occasion. It would be too much, even for Kathy and Peter, to insist that they change the entire world. It is realistic, however, to believe that they will do their part in cleaning up the mess that we are leaving them. To this end, they intend not only to volunteer in their community, but also to rescue a dog, or another cat, or both. They will ensure that these prospective animals are polite to each other.

Although Kathy and Pete have chosen to minimize the ceremonial aspects of this day, they do wish to exchange rings. This symbolizes the deep commitment they feel toward each other.

You may now exchange rings.

Do you, Peter, take this woman, Katharine, to be your lawfully wedded wife?

Do you, Katharine, take this man, Peter, to be your lawfully wedded husband?

I didnt even dream about saying anything about obedience.

I now pronounce you wife and husband. 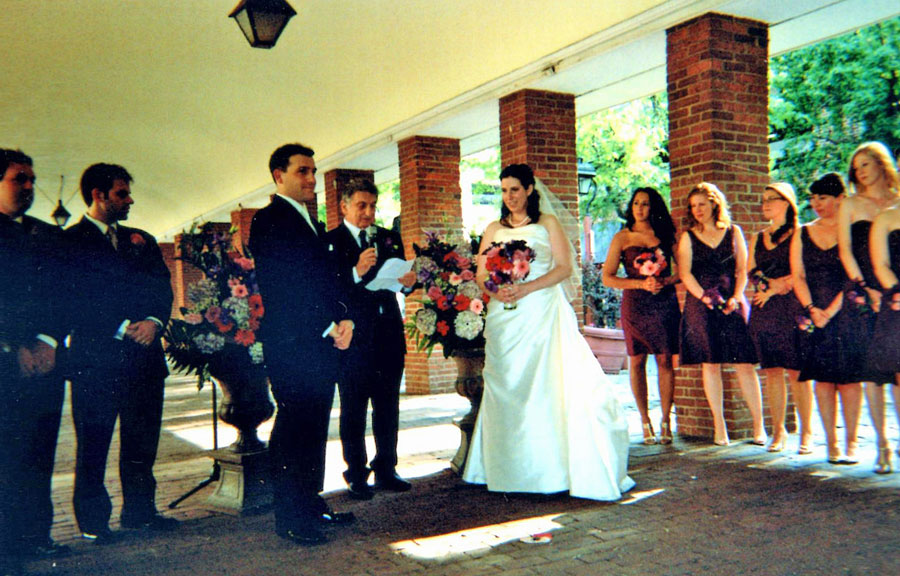