Its a small island, and we were there little more than a week. So this report will be brief.

One way to get there is by plane, 90 minutes southeast of Puerto Rico. There are in fact two airports, though one should be sufficient. This not your typical Caribbean destination. If you want to lie on the beach and enjoy calm, balmy seas, try a different island. The water is rough and dangerous, especially on the Atlantic side, where we stayed. No elaborate resorts or golf courses. The place is little developed; its two U.S. medical schools seem isolated and incongruous. The predominant terrain is mountain and rain forest. The roads are narrow and twisty. I hate to think that they would be like with more traffic--there is very little now, but it does include some formidable buses that can barely negotiate the curves. It took a taxi over an hour from the airport to our first accommodation, though it was only about 15 miles distant.

Our first four nights were at Beau Rive, a small hotel with great views (and sounds) of the Atlantic crashing against the rocks 250 feet below. The British manager, Mark Steele, had spent some time in Africa, including a stint as personal assistant to General Gowon, then the former head of government in Nigeria. Mark had considered building his hotel in Ghana, but Dominica was his first choice. Beau Rive is a lovely place with great food. Dinner cycles among fish, chicken and vegetarian. Marks elderly mother plays the piano, as she once did in London theaters. There is a swimming pool and no television.

One of the islands main attractions--certainly for us--is hiking. We had not realized how hard it would be to reach the starting points. Buses are scarce and go when they feel like it. Taxis are expensive. Thus we were exceptionally lucky that Suzan and Peter, a demon hiking couple from New Jersey, were also at the Beau Rive. Not only were they highly compatible, they had a nice white Suziki rental car. It was small, as befits the roads, but big enough for four. Together we undertook a number of hikes. Our conclusion: hiking in Dominica is more serious than it may seem. The trails are not unduly steep, but they are rocky, at times narrow, and above all wet. Although we were there in what some sources call the dry season, intermittent tropical showers sprang up repeatedly. You have to put your feet in the safest places, which we did not always do.

Our major objective was the most famous on the island: boiling lake.A flooded fumerole. Guidebook: it is arduous, wet, exhausting, muddy, eternal--and one of the best things you can do in all the Caribbean. A guide is mandatory, we were told, so we engaged Marvin, a very fit young man who met us near the starting point. But Marvin, alas, had not the proper guiding papers, and the local ranger forbade him to proceed. We thought this was a shakedown, but no: Marvin had to turn back. Mysteriously, we were permitted to continue. The hike is all the guidebook claims. After three or four hours, we were in sight of the fumes of the lake. The trouble was that was about a thousand steep feet below us. The thought of traversing those feet down and then up was daunting. It began to rain. We voted four to zero to head back.

After this we were ready for a beer. I recommend Kubili, the local brew. Susan was hungry and tried to buy a Mini Maria. The Dominican woman at the counter refused repeatedly to sell. Finally we discovered that it is not a sweet but a condom. Oddly named, we thought.

After four days at Beau Rive, we headed for the Jungle Bay Spa, an hour down the Atlantic coast. The place is less grand than the name suggests, which was fine with us. It has 35 cabins set nicely into the forest. Fifty-five acres. Its spa-like activities include massages and yoga. Also Caribbean cooking classes, sea kayaking and hiking. We did attend the 7:30 a.m. yoga, and Susan had numerous massages. The establishment was started in 2000 by a local couple, and opened two years ago. The food is not bad; the atmosphere is lovely. We met several American visitors, plus the typical Cypriot-Ukrainian couple. The wife (Ukrainian) took one look at me by the swimming pool and exclaimed, What did YOU do to your arm? I must explain.

On the way to Boiling Lake, I slipped on a horizontal rocky ledge. Hit my arm. No pain or apparent damage. But 15 minutes later I felt the contact point swelling in an ominous, watery way. By the time we had returned, most of my arm was multi-colored and swollen. Its nothing much, I announced. Ive done this before (more or less true). This is why the Ukrainian woman was startled. Just like my husband! she said. In fact, the husband was worse off: he had dislocated his shoulder as well, and was spending his holiday in a soft sling. His was a more dramatic consequence of the risks of hiking on the island. He had been scrambling over a big boulder below a waterfall when he fell. At least he did not drown, as a couple of others had done recently. A number of the hikes are up and often across river beds, punctuated by those slippery rocks. Its lovely, but do be careful. You are rewarded at the end by a big waterfall. You can swim in the plunge pool if you dare.These rivers are a big attraction of the island. There are said to be 365 of them (366 in leap years).

We had a lovely time. We encourage you to go, so long as you know what you are getting in for.


Arm postscript: no breaks or chipping. But it took several months to look normal: 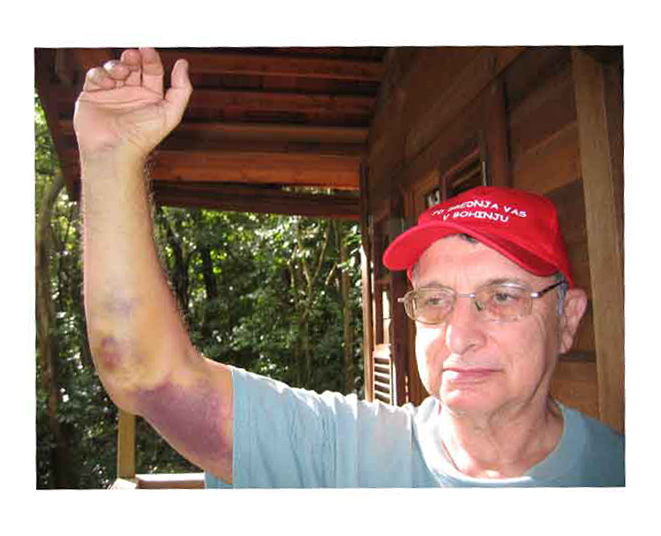