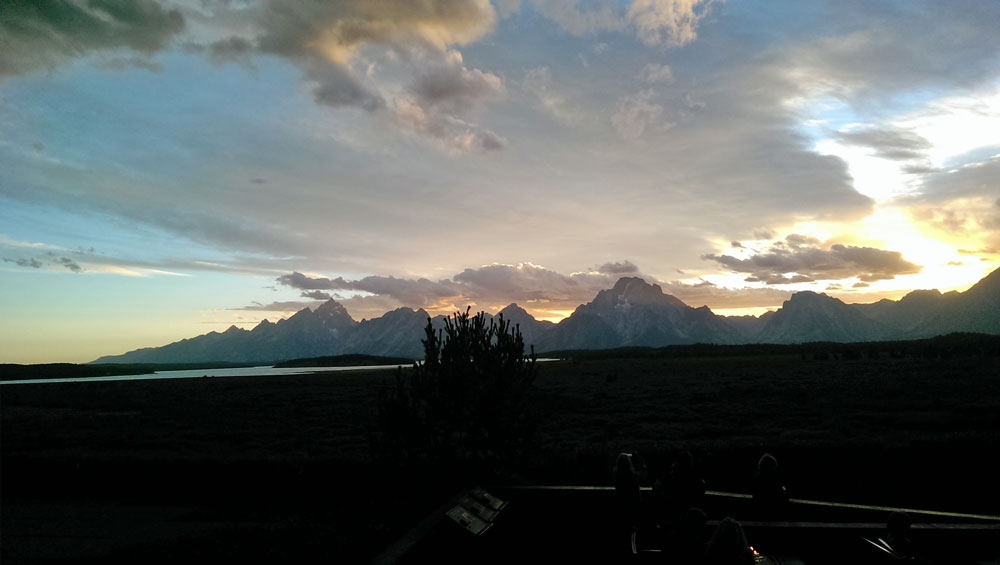 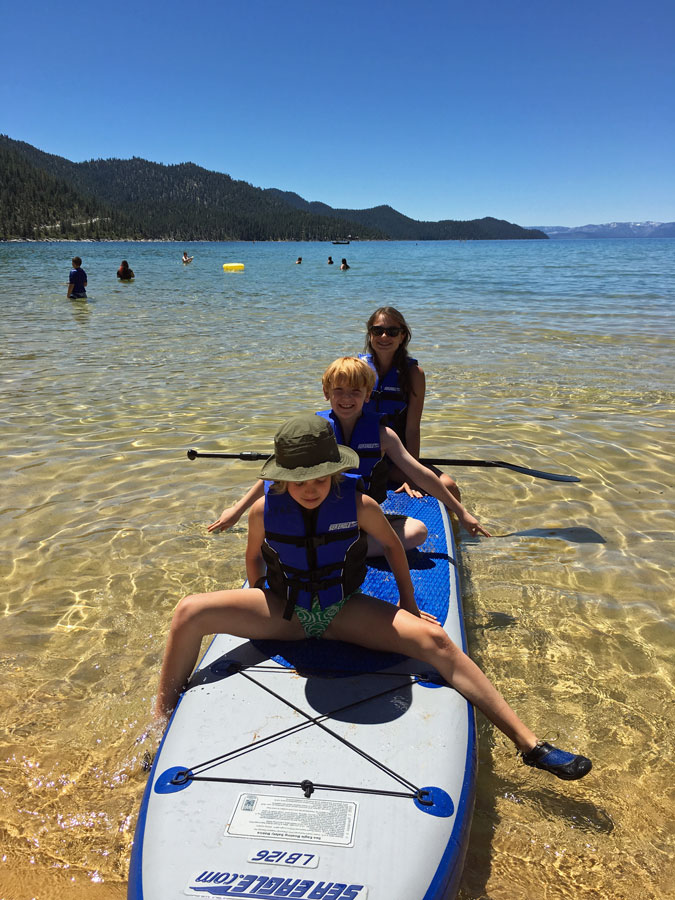 On the 16th Zach, nearly nine years old, and I flew to Reno. This was the start of Zachs first time (12 days) without his parents, but he was an experienced traveler, having visited Israel, India, East Africa, Guatemala and Jamaica.At the Reno airport we ran into Susan. What a surprise! Well, no. She had arrived to meet us after ten days in Denver and Santa Fe, site of the WARP (Weave a Real Peace) meeting.

We picked up our bright red Ford Fiesta and, after a night in Truckee, reached the Claire Tappaan Lodge. This big wood structure was built in 1934 by the Sierra Club. It was primarily designed for snow, of which there is an enormous amount in winter. But it is open to the public all year. We were there for a 5-day Club grandparents/grandkids trip. It was led by Angela White, co-leader of our Sierra Club venture in Slovenia, precisely ten years before. There were 14 adults and an equal number of kids, mostly in the six to eleven range. Five Club staff, including Angela and her 6-year-old granddaughter, Chloe.

Rooms in the lodge are small and not luxurious. Ours had five bunks--a stack of three and another of two.Reaching the top ones was challenging. Luckily for us, we were the only inhabitants.

The lodge operates on a strict schedule:

There is a sign-up list for chores. Susan and I several times washed dishes--a serious undertaking, as there were often more guests than the 33 of us. Equipment included a sanitizing machine, which left the dishes too hot to touch. The kids were very serious about the chores. In their recreational hours, they killed zombies. All of them had a great time. We thank the Siera Club for introducing the youngest generation to the outdoors. Zach is now a lifedtime member.

Daily excursions began by car, to beautiful Lake Tahoe and its beaches twice. Another day we hiked to much smaller but also beautiful Lake Flora. Afternoons the kids played around back at the Lodge. On the last evening came a talent show, with granddaughters playing the piano. Zach wrote a skit for himself as a hiker and Susan and me as a menacing wolf and bear.

And then we drove to Berkeley and the Bay Area for a few days to visit family and old friends. These included several climbing partners whom I had not seen for many years. They had grown older, unlike me. 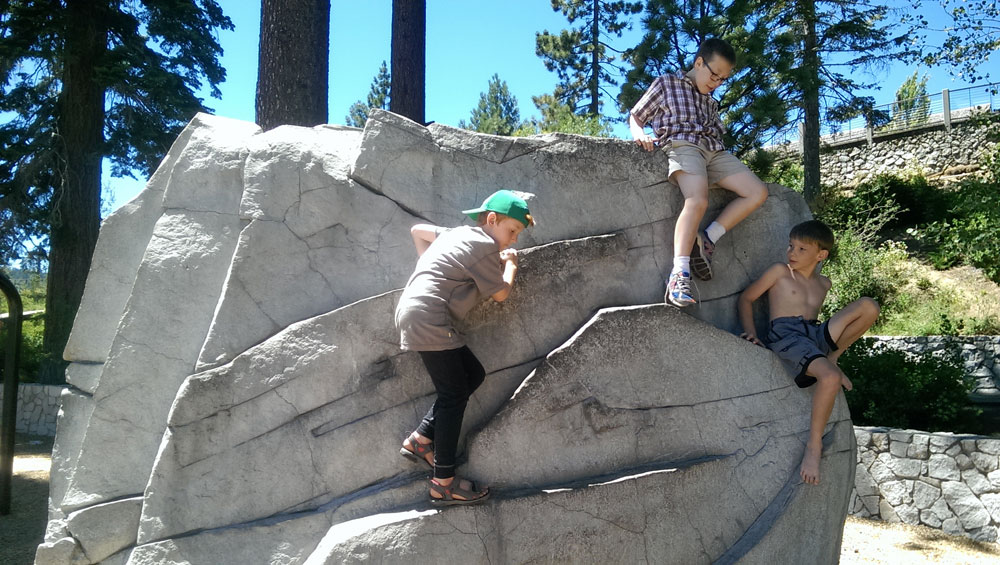 At the beginning of September we headed west again--this time without Zach, who had just turned 9 and was about to start 4th grade. We flew to Denver to spend a couple of nights with Deidre and Joe Adams, who had been with us on our Annapurna trek two years ago. We visited the Butterfly Pavillion, with its many strange flying objects, took an extremely short hike and had an Indian dinner in cosmopolitan Boulder. Then we headed west and north in our rented Camry. We spent a night in Vernal, Utah, and left for a drive through the spectacular Flaming Gorge. At least we believe it is spectacular, though we took a wrong turn and missed it. But we did visit the Dinosaur Monument. And the mountain scenery as we moved north on Wyoming was glorious. At our lunch place, a sign welcomed guns but requested customers to shoot straight, and only when necessary.

By evening we were in Jackson, Wyoming. I had not been to the Tetons for more than 40 years, Susan for even longer. The town of Jackson has grown, and parking and camping have been rearranged to accommodate the crowds. Even after Labor Day, lodging was full (book well ahead) and so were several campgrounds. We stayed at the Jackson Lake Lodge--radically different from the scrap of campground I inhabited in 1953. The main lodge has 6-foot-high windows with incomparable views of the peaks, Mount Moran especially. But it is pricey.

My ambition was to repeat the first climb I had ever done in the Tetons, the Durrance Ridge of Symmetry Spire. Its about a thousand feet of rock, but only a couple of moderately hard pitches. The problem for me would be reaching the base, several hours of steep uphill. First I had to find a guide. Here again a lot had changed. In the fifties the Exum Guide Service had half a dozen guides. Now there were about 40, with another 20 employed by a company in Jackson. And prices had risen: $20 in $575 today. Because my 1952 guide, Bob Merriam, was 92 and retired, I had to look elsewhere. The guide service was doubtful about taking me on at any price, but with boasting and deception I persuaded them. So at 7:00 one morning I took the first boat across Jenny Lake. The boats were much bigger than I recalled, and faster--we were across in five minutes. My guide, Bill Dyer, has an impressive resumé: he is one of little more than one hundred with International Mountain Guide certification. Those familiar with Teton climbing will appreciate his unroped ascent of the North Ridge of the Grand, as well as his ski descent of the CMC face of Mount Moran. He and three partners did this first in 2002; no one has been rash enough to imitate them.

For all his experience, Bill had never climbed the Durrance Ridge. It seemed that none of the Exum guides had done it. Bill told me that Symmetry had lost favor because of its long approach. (I found this puzzling, because there are no short approaches in the Tetons.) The peaks southwest ridge is still popular, as is to a lesser extent the Jensen Ridge--which has, however, developed a sinister reputation from the many accidents that have occurred on it. So little frequented was the peak that Bill wasnt sure where to cut off from the trail. His first attempt was through some nasty boulders and brush. Almost immediately I toppled backwards, bruising my arm (again). We tried elsewhere, but my legs were weak, my back ached and my pack suddenly weighed 50 pounds. It was soon obvious that I was headed nowhere but back to the lake.

It was a great disappointment. I am sure I could have made it another day. I am equally sure that I will not try. During my attempt, Susan went horseback-ridng, to commemorate a similar Tetons event in 1963, with her boyfriend of the time.

The weather was gorgeous our five days in the range, ideal for hiking. We visited Phelps Lake, in the Laurance Rockefeller Preserve in the southern part of the park. Like other lakes, too cold to swim in--even for Susan. We climbed Signal Mountain, just northeast of the peaks. Great views, even if the sense of achievement is mitigated by the summit sight of cars that had taken the road. Also followed the east shore of String Lake and Leigh Lake and, on our final day, repeated the Jenny Lake boat ride. Instead of trying to reach the Symmetry Couloir, we followed the trail 4.5 miles into Cascade Canyon. We saw many other travellers (it was Saturday) plus a moose and child (mooselet).

Also: took an evening raft trip with 16 other clients down the Snake River. Definitely not white water. We passed the place where Ansel Adams took his famous photo of the mountains. And we did venture the tramway 4000 feet up Rendezvous Peak. More great views, but chilly.

Our great weather vanished soon after we reached Yellowstone. We awoke to heavy snow, which persisted much of the day and dropped as much as eight inches. (This is not unusual for mid-September.) Even after Labor Day Yellowstone is crowded. People no longer feed bears, but they stop on the road if they see them. Much easier to spot are the huge, placid bisons, whose numbers have grown so sharply that they may have to be culled. We did take some hikes, beginning with a partial ascent of Mount Bunsen. Trail note--grizzly bears frequent this area, use caution when traveling. As in the Tetons, we carried bear spray. We took a ranger-guided morning walk along the south rim of the Yellowstone River, spectacular and a thousand feet deep. On our last day, we walked a half mile along the Boiling River until Susan found the swimming hole. Its very hot and very cold.

Yes, we did see Old Faithful.

Then came two nights in Gardiner, a small Montana town just outside the Park. Its main attraction is rafting the Yellowstone, but unhappily the river had been closed in August because of some nasty fish-killing parasite. Much of it had been reopened, but most of the rafting companies had shut down for the season. One that had not, the Flying Pig, was fully booked. Perhaps just as well for us, as the weather had turned chilly. We had supper at Rosies Bistro. The waitress was Bulgarian; the recommended beer was Moose Drool. We met a New Jersey couple who had recently settled in Gardiner, chill and all. We would think the winters rather bleak, but not uneventful: we heard a young woman at a Conoco station talking loudly into her cell phone--I dont need to go to the Park to see wildlife! We have grizzlies right here in our parking lot. 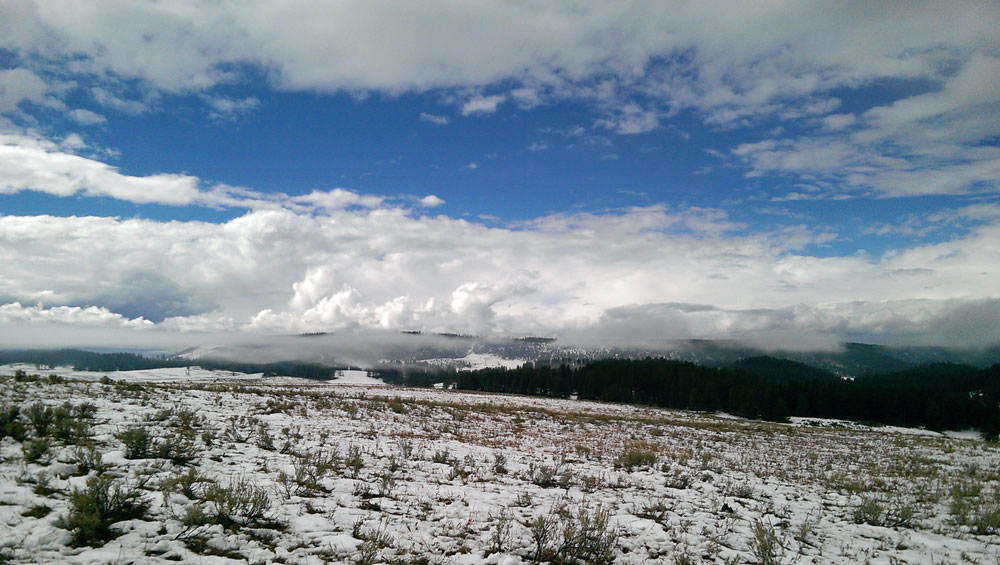 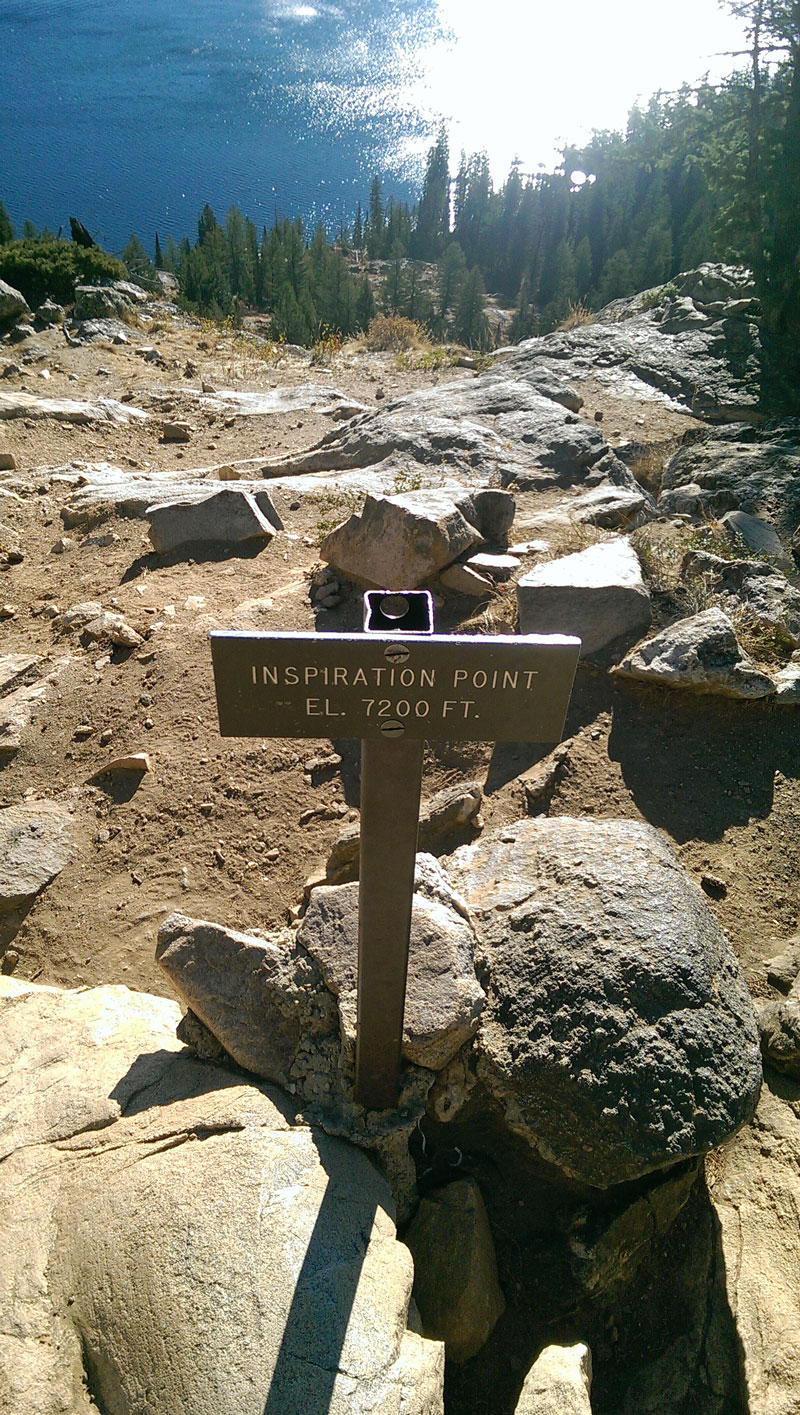 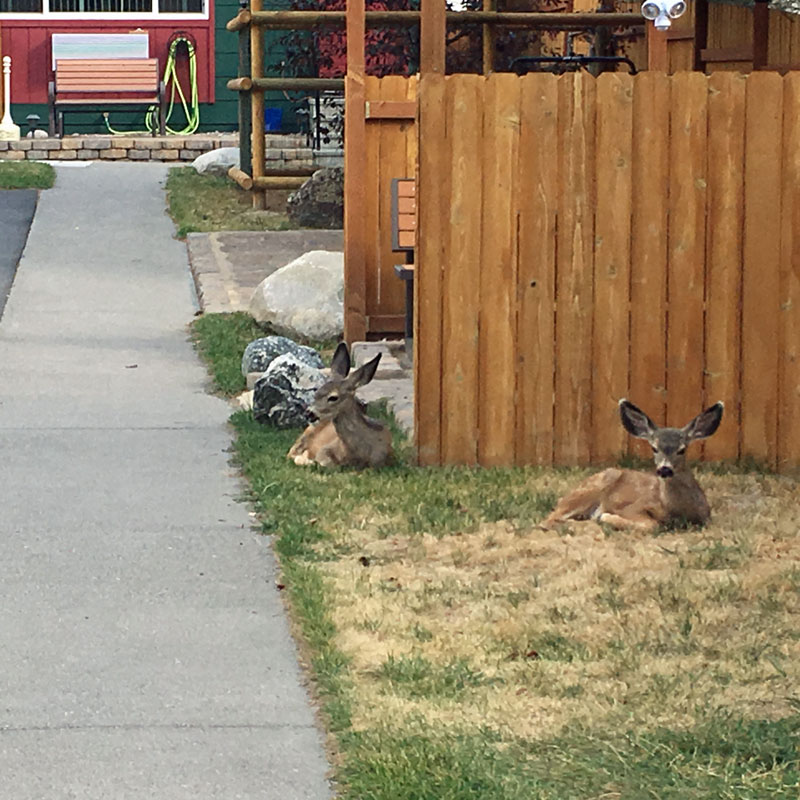 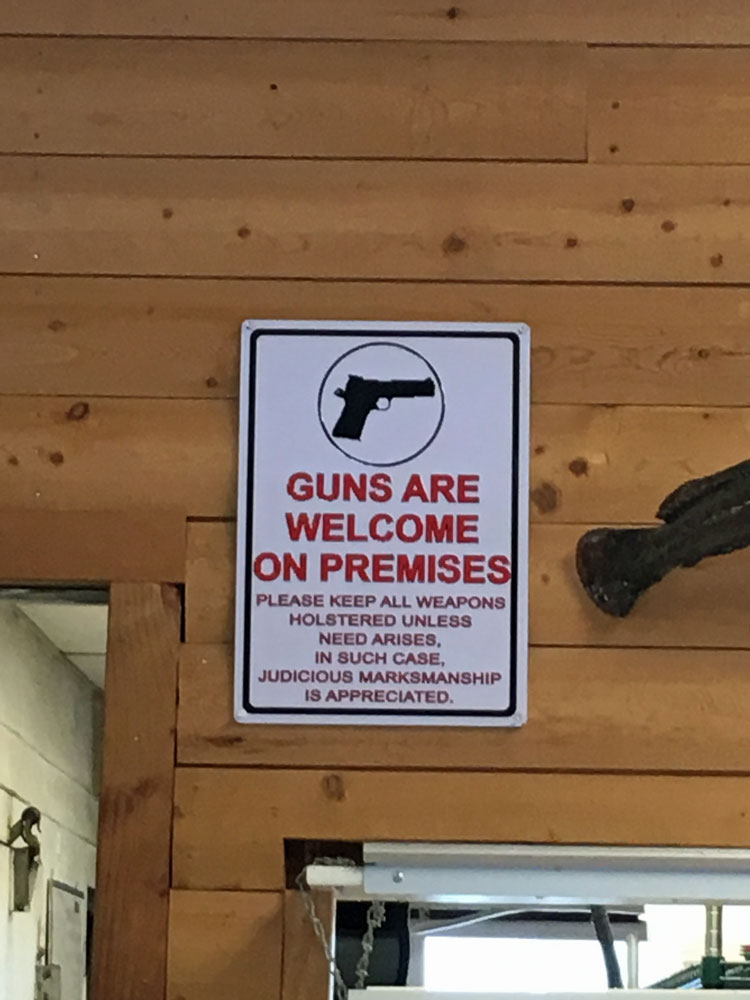 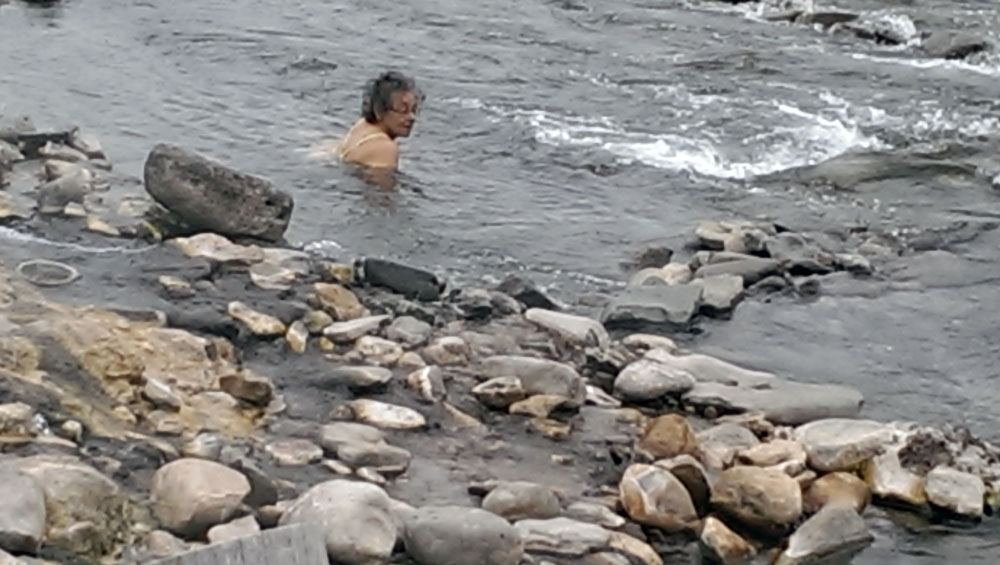 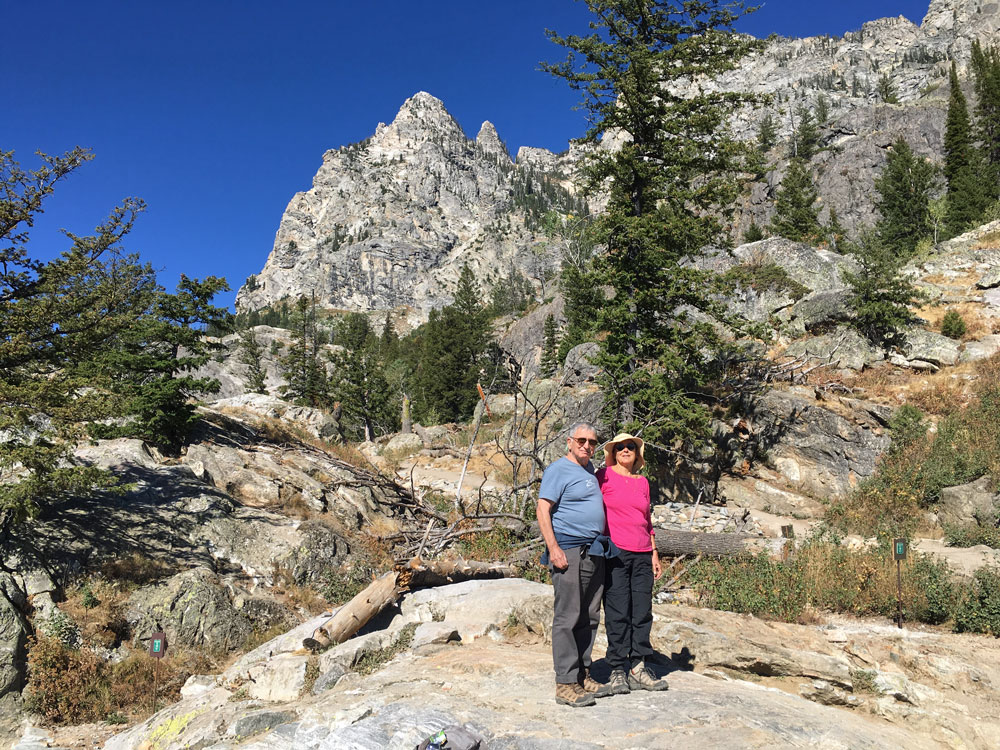