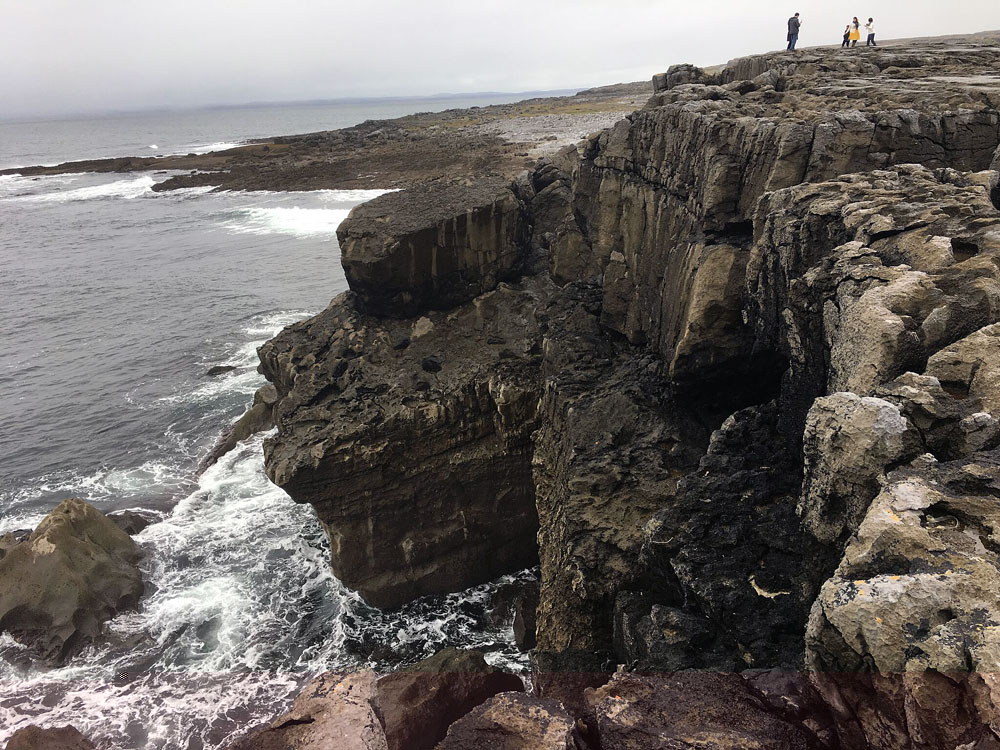 
--The Irish are very nice;
--They drink a lot of beer and listen to lots of music;
--The Irish language looks and sounds very hard;
--The adage about Irish weather is true: If you dont like it, just wait five minutes and it will change.
--Restaurant meals are big. Most menus carry a long list of allergens to watch out for--14 in all, including crustaceans and lupin. Thats not counting Trump. 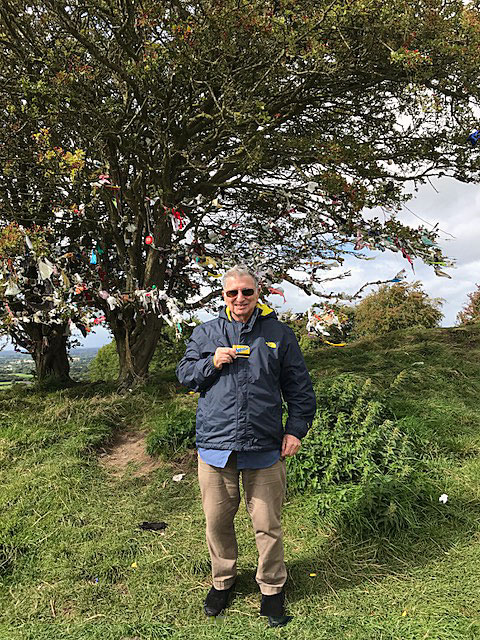 --Towers and castles, often ruined, abound. So do archaeological sites. Newgrange is one of the most famous, and only a short bus ride from Dublin, see here.
--Beehive huts at Dingle. These curious stone structures really do look like beehives. Or igloos. They date from a long time ago.
At one of these sites I discovered an artifact that I took home. It was a New York City metrocard, perhaps from the 13th century. It had $3.45 worth of fare remaining.

This was our first trip to Eire. We were traveling with another couple, Jordy Bell and Steve Jacoby. References to Steve are not to me.

We started in Dublin, where we rented a comfortable AirB&B with two bedrooms and a modest supply of breakfast food. The city is by far the countrys largest, but the population is only about a quarter of Brooklyns. High buildings are prohibited. Traffic seemed light to me, but it isnt always or everywhere. There is an abundance of double-decker buses.

The city is full of literary history. It has bookstores comparable to New Yorks biggest. In one I found an entire bookcase devoted to Easter 1916, surely one of the defining events in Irish history. We visited the enormous general post office (and museum), central to the Easter rebellion. Later we checked out the Book of Kells and a Yeats museum. Also had a walking tour of Joycean sites. 7 Eccles Street, former residence of Leopold Bloom, is gone, but similar houses remain. Beer and music are plentiful, as is good food. We recommend the Gallaher Bistro and Le Bon Crubeen. Crubeen means sheeps or pigs foot, but you may not wish to know that.

After four days in Dublin, we took a taxi to the airport for our rental car, a brown Opel with a trunk big enough for our baggage. Steve and I, being over 75, had to provide certification from our insurance companies that we had had no accidents in the last three years; a doctors note confirming our fitness; and a letter from ourselves saying that we really could drive. The Avis agent accepted our documentation without comment. There was endless confusion, however, about Steves auto (not personal) insurance. This took 45 minutes to sort out, with numerous phone calls, one of which went to India.

All four of us drove, with me the first. I was fortunate to be on a dual carriageway, which made me feel at home--except that, like the Brits, the Irish drive on the wrong (left) side of the road.

The last is only one lane. If you encounter a vehicle coming the other way, one of you must find a turnout. Possibly some distance in back of you. Even the narrow(er) roads are a challenge. There are no shoulders, just a yellow warning line between you and the hedges. These are not really hedges, but low stone walls disguised by vegetation. You do not wish to engage with them. Hence it was the responsibility of the front-seat passenger to call out close! with fitting urgency. This did not make for relaxing rides.

We spent a night in Northern Ireand, site of sectarian violence but quiet for the moment, as part of the U.K. We drove across the international border without noticing it. We met people on both sides who feared a Brexit-mandated hard border with customs and immigration controls. Our objective was the Giant's Causeway. There is a fine sea-side walk, which rises to the base of the basalt columns formed by ancient volcanic eruptions. The columns reminded me of Wyomings Devils Tower, though smaller and darker. The place has been described as perhaps the strangest and also the most spectacular of Irelands scenic attractions.

We had missed Belfast, Northern Irelands biggest city, but we walked around the walls of Derry, the second one. We saw murals devoted to the Good Friday peace agreement of 1999 which settled, at least for a time, the political status of Northern Ireland.

Next we continued our counter-clockwise exploration of the Emerald Isle (see itinerary below). We stayed at comfortable B&Bs, which resembled small hotels. Most had en suite bathrooms, televisions that we did not turn on, and wi-fi by which we could unfortunately follow world events. The breakfasts were filling; they included the Irish Breakfast, which could satisfy many a diner until supper time, as was its original intent. One description: A large cooked breakfast of meat (bacon, sausages and black and white puddings), eggs, vegetables and potato all fried in creamery butter, it is served with a generous helping of homemade Irish soda or brown bread for soakage and washed down with a strong cup of breakfast tea such as Barry or Lyons tea (depending where you are) and a glass of orange juice. For something lighter, you could order up a big mound of scrambled eggs with smoked salmon.

Among our stops was Sligo, which is very Yeats (see photos). Ben Bulben, the long mountain featured in his poetry, looms over the graveyard where the great poet lies. That evening we wanted to find some Irish music. It came to us at the Ardmore House in Clifden: two musicians playing for just a few of us. We tried to join in, then did our rendition of This Land is Your Land.

In Connemara we all took a horseback ride for several hours, much of it along an ocean beach. Except that Steve didnt go. Neither did Jordy. I decided to stay behind as well. So only Susan took the ride. She said it was tiring but very scenic and reported that her personal guide, a girl of 10 or 12, was amazing. We three spent the time on a beach from which you can walk to Olney Island. That is, when the tide is low. When we arrived the tide was at its height, and the track was more than 12 feet under water. So we did not attempt it.

You may be familiar with one of our destinations from Robert Flahertys quasi-documentary, Man of Aran. There are three Aran islands, each at least an hour ferry ride into the Atlantic. (If in a hurry you can fly there in about ten minutes.) We stayed two nights on the smallest, Inisheer. It is about three miles by 1.5, and has a population of 260. Beautiful but bleak. The three islands together had a population of 1225 in 2006. In 1841 they had 3521. Many people visit, but mid-September had an end-of-season feel. You could swim in the cold ocean water if you really wanted. We didnt. We did walk around much of the island, along small roads edged by miles and miles of dry stone wall. And we scrambled around Dún Formna, a 14th-century fort and tower largely destroyed by Cromwellians in 1652. A precarious ascent yields great views. All four of us walked to the home of Annette OFlynn for great massages. Worth the trip. Susan and Jordy also recommend the seaweed bath (not in the sea, but in a bathtub).

On to Ballyvaughn. We walked the woodland loop, about five miles. Very green and scenic. Nearly level, but the wooded and stony sections were wet and slippery. Next day it really rained, but we ventured part of the famed cliff walk by the sea. Very spectacular. Watch your step. We knew we had lost the way when we blundered into a barn with 50 cows. Their supervisor kindly redirected us.

It was a long drive on to Dingle, a beautiful peninsula jutting far west into the Atlantic. You can take a ferry to the Great Blasket Island (we did not). If you think Aran is sparsely populated, try Blasket. No one lives there at all. In the 1920s and 1930s the Blasket Island writers produced books which are deemed classics in the world of literature. They wrote of Island people living on the very edge of Europe, and brought to life the topography, life and times of their Island. They wrote all of their stories in the Irish language. But continued emigration--a motif for most of Ireland--drastically reduced the population. Only 22 remained in 1953, when the place was evacuated. It is said to be wild and beautiful without people. There is also a lovely museum, where we met a couple from Mississippi; they urged us to make their state our next exotic destination.

Dinner at Out-of-the-Blue, seafood only very popular and recommended. Then we went to hear Irish music at OSullivans Bar, the oldest in town. Musicians often get no pay, but you are encouraged to drink. There we saw a tall bride in white dress; she had stopped by after her wedding, along with her bridegroom. We did not see Fungie, a dolphin who frequently swims the nearby ocean and follows boats. He has been seen doing this since 1984.

Next stop Cashel. Visit the Rock--a big, ancient chapel and tower. Also do not miss the Acquired Brain Injury Ireland Bookshop. We visited Killarney the next day. The castle and cathedral are even bigger than the Rock. We turned that evening for a concert by Coda, seven Irishmen who sing and play all sorts of instruments. We had a very good lunch at the Butler House and, for a change, Thai food for dinner. 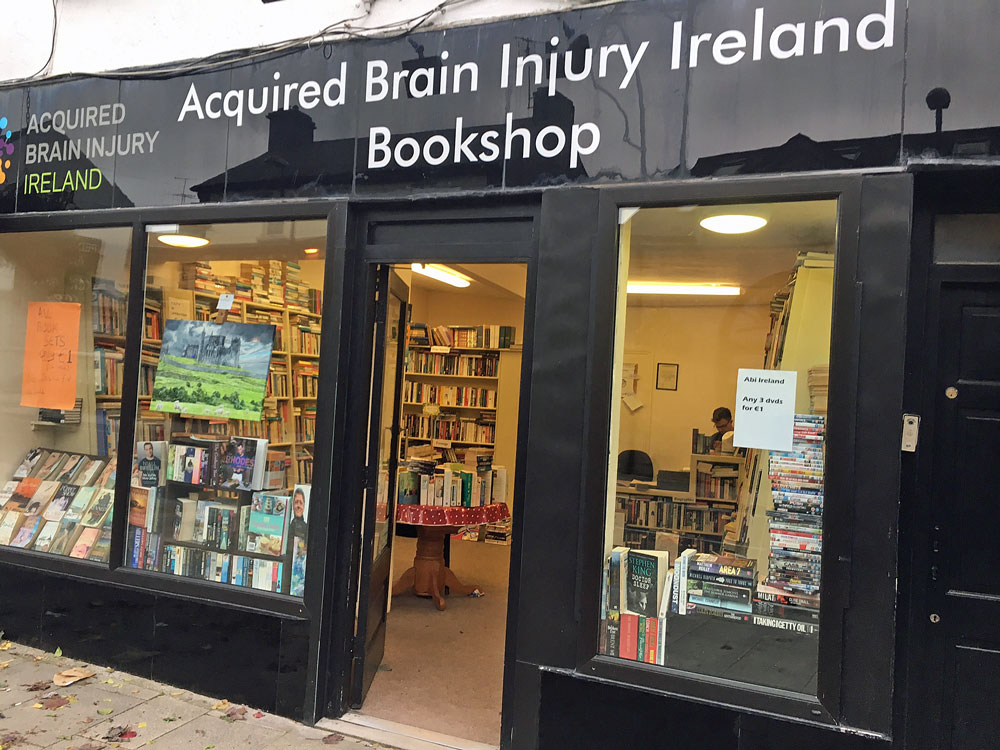 Cork is Irelands second-largest city--all of about 125,000 inhabitants. Like similar places in the country, it has extensive pedestrian areas and one-way streets.

Ennis: last stop. We recommend Brogans Bar and restaurant for food and music.

Flew back from Shannon.

Addendum: weaving from Susan: mostly production weaving on large, very old looms. This is definitely a dying craft. Susan was happy to talk with one material dyer in Dingle. Having bought a pot in the £ store in Derry and brought silk from home, she had small dye pots boiling away throughout Ireland. 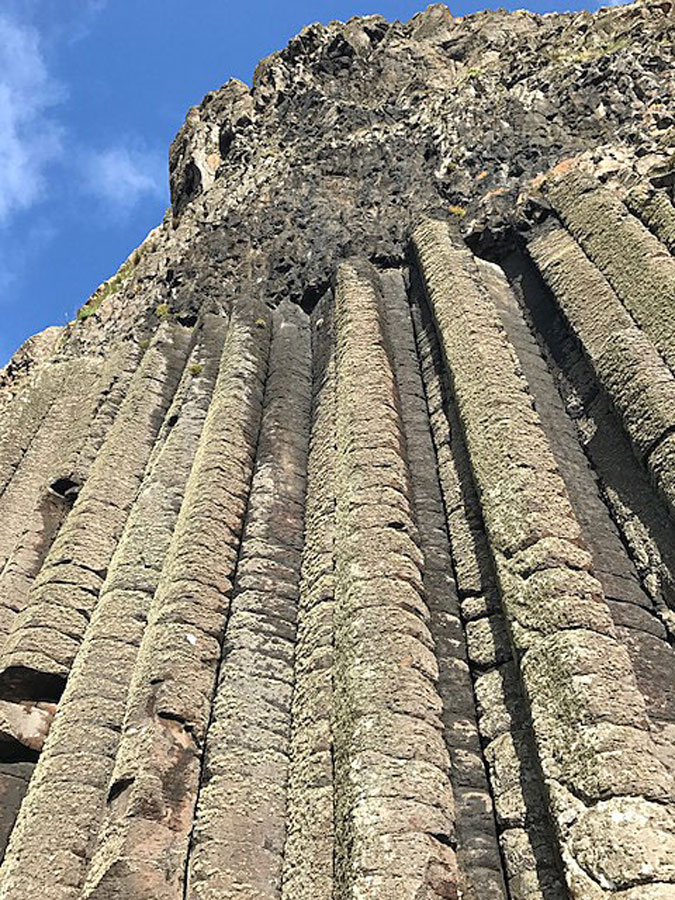 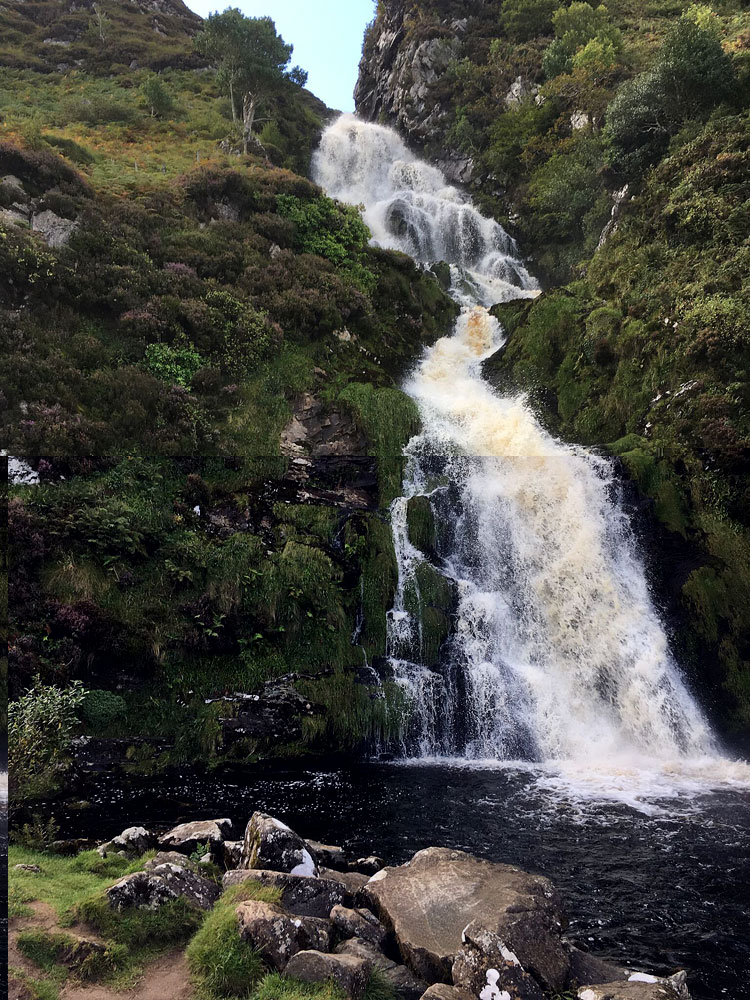 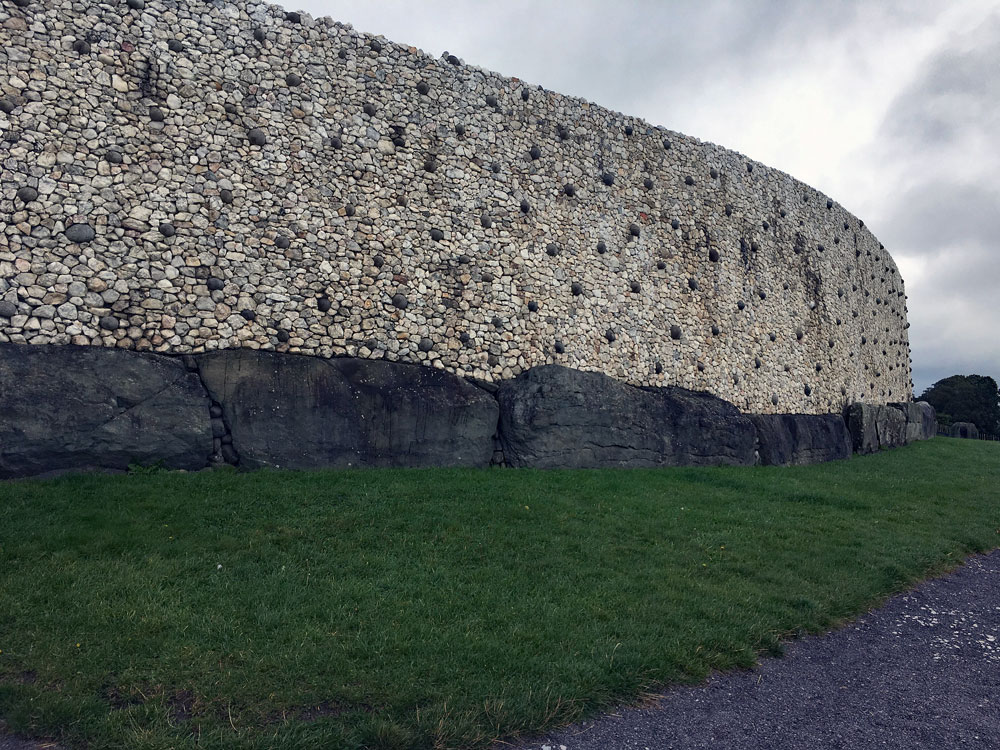 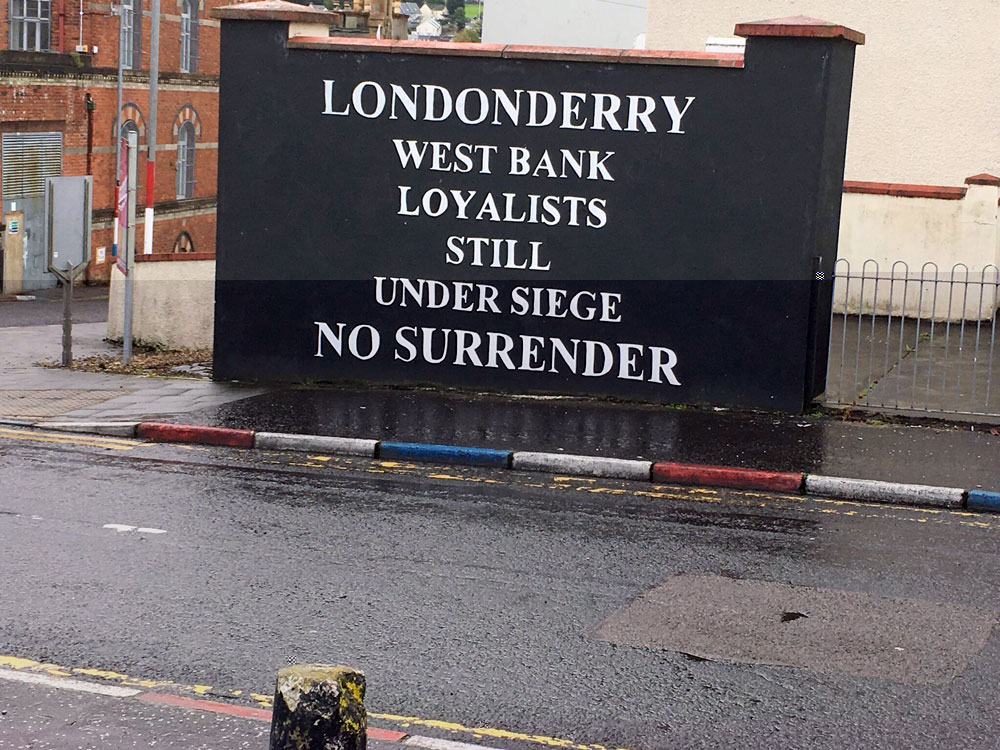 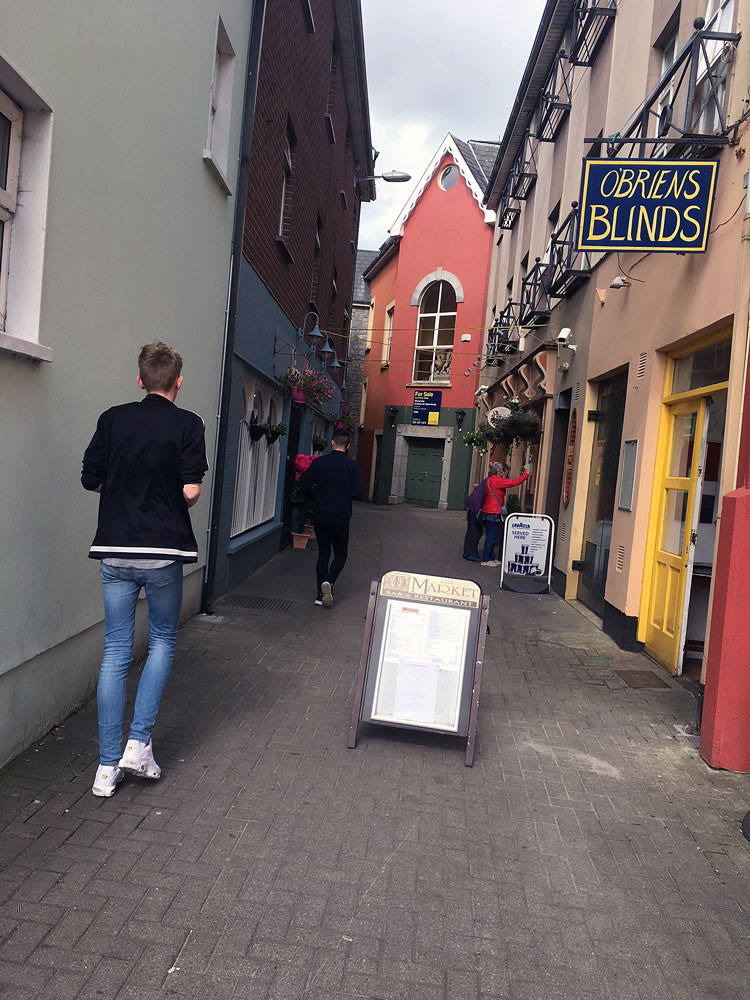 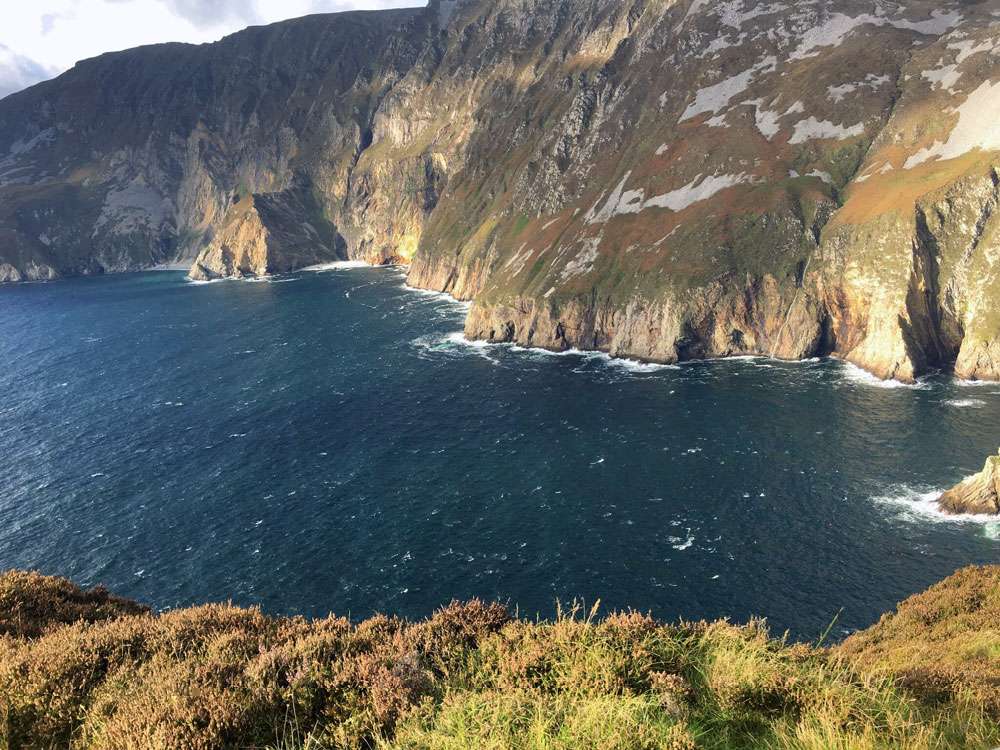 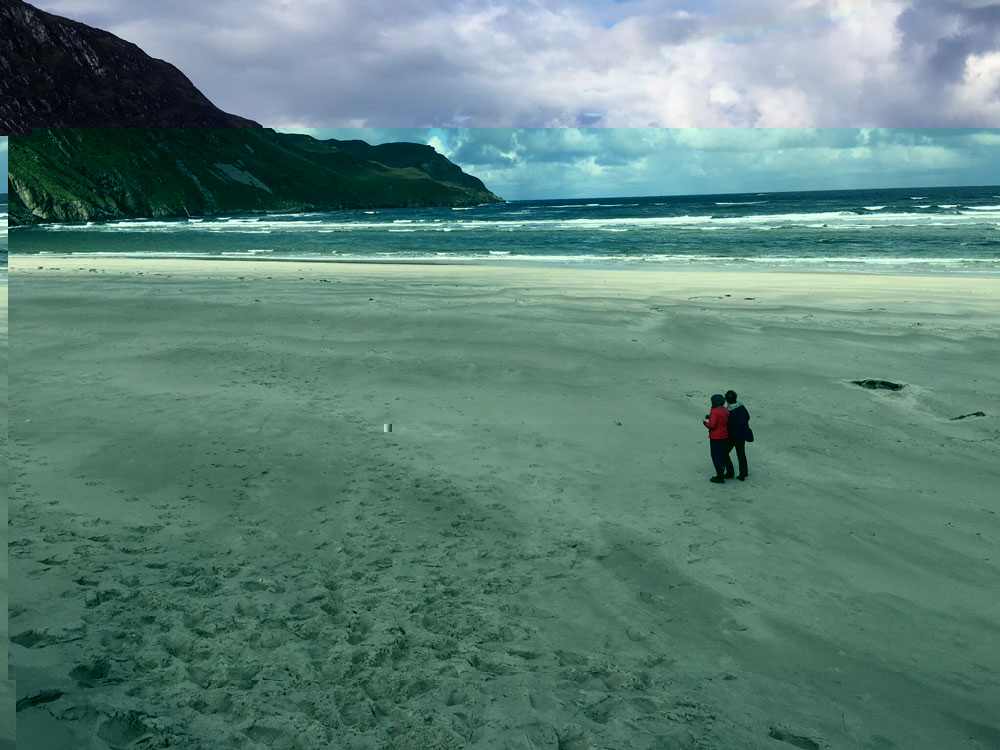 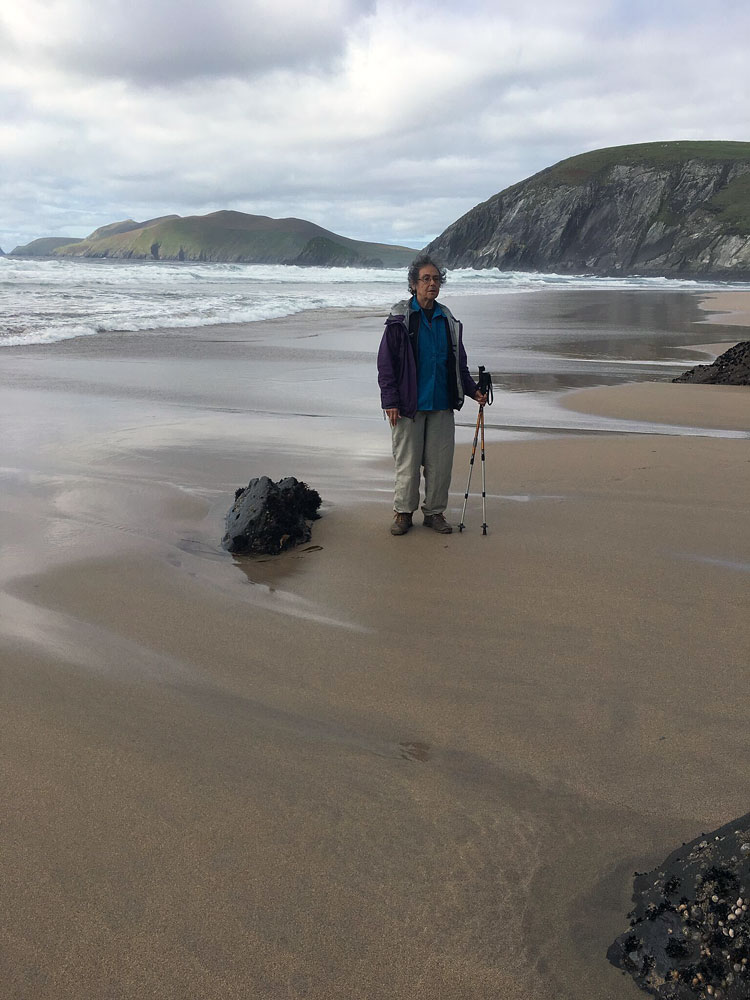 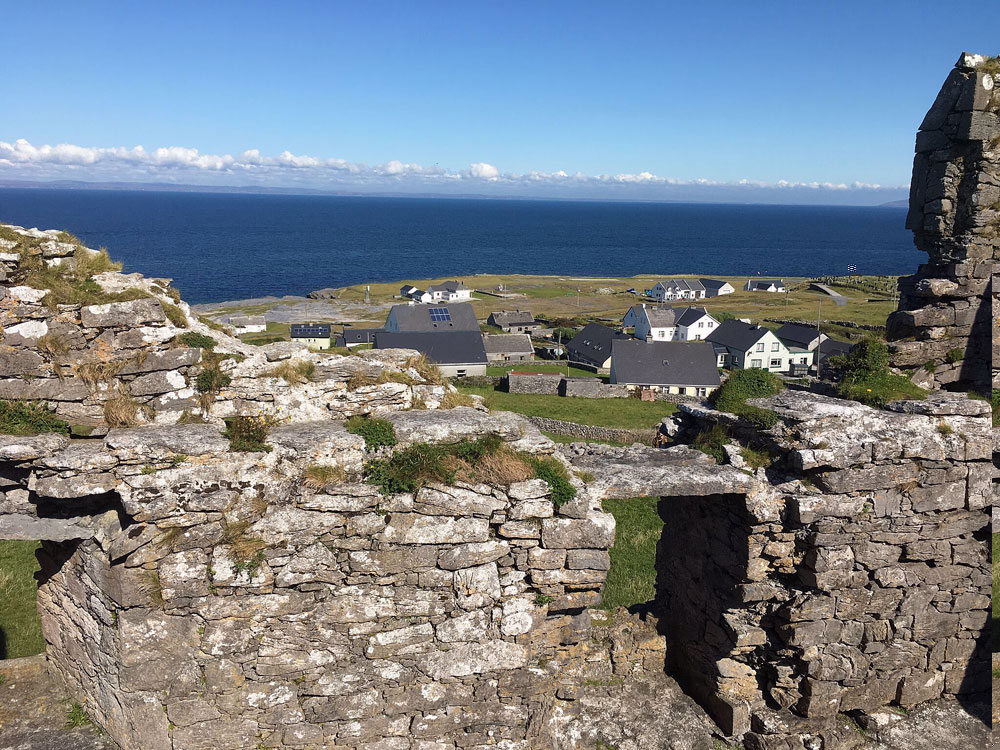 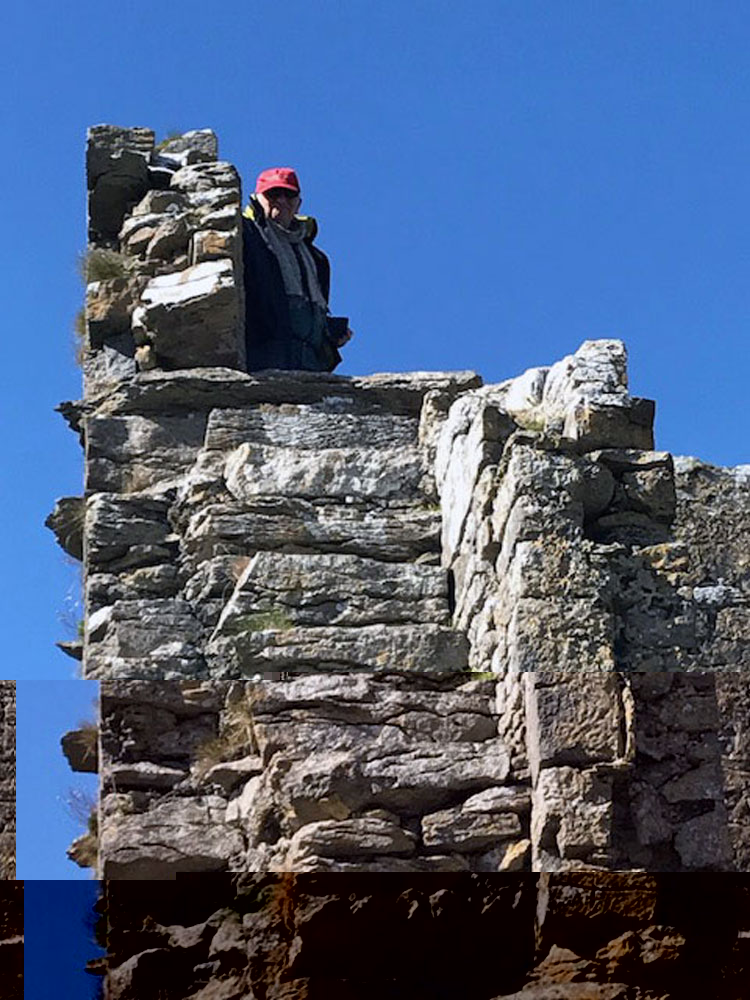 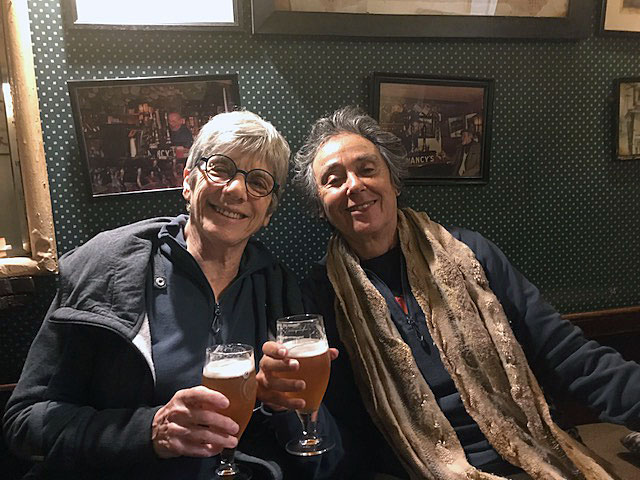 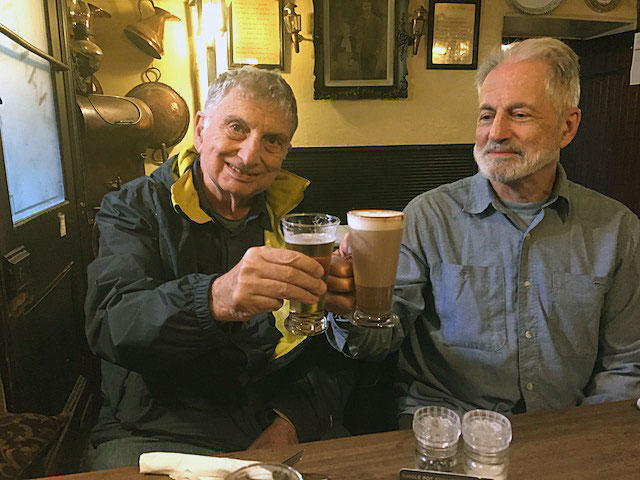 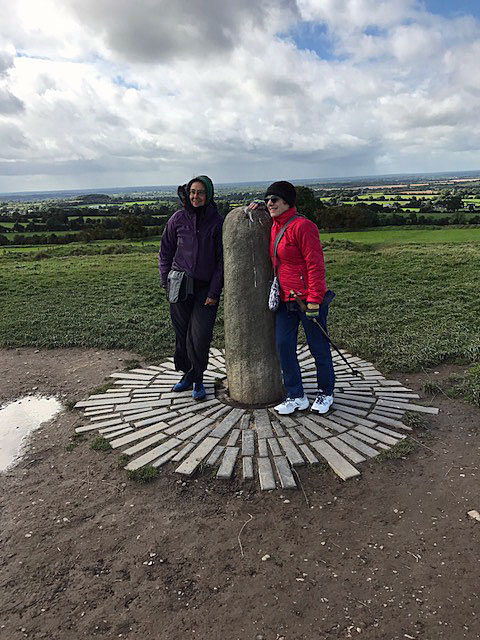 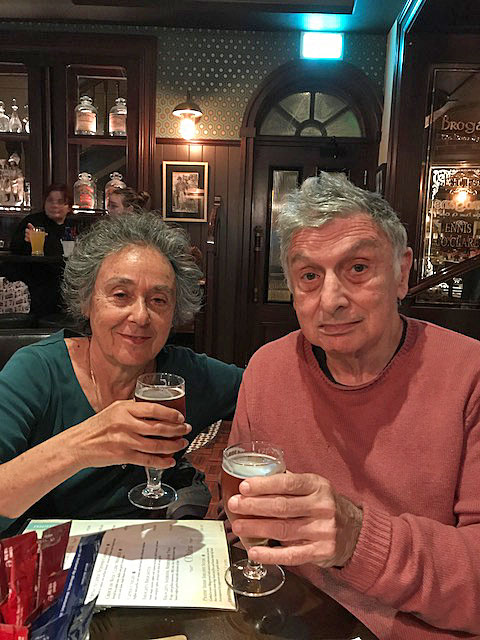