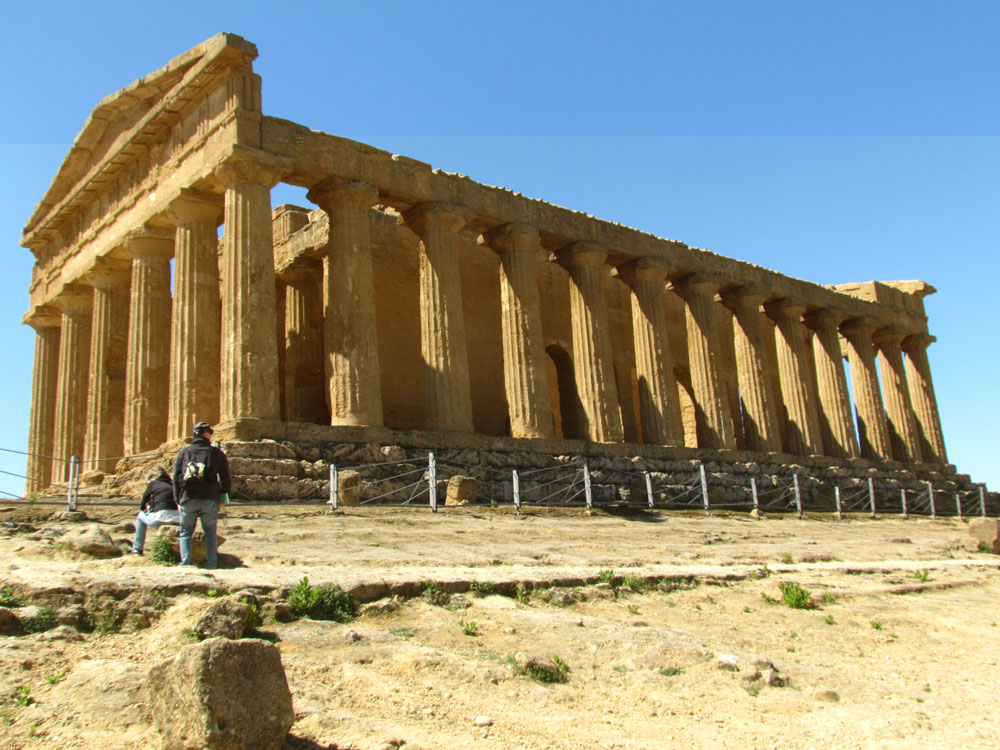 We wanted to visit Sicily without having to plan the trip ourselves. So once again, on the basis of happy experience, we chose a Sierra Club outing: Treasures of Sicily, Italy. Eleven days of hiking and exploration.

But since we were flying there anyway, we started with four days in

Susans last trip there had been in about 1987, mine ten years before. I had vivid memories of drinking too much wine and having my wallet swiped from my hotel room, where I should not have left it. This time we chose an AirB&B near the historic center. It was quite comfortable and had a clothes washer that we could actually use, after some study. The bedroom was windowless, thus deadening the lively street noise.

We arrived on Palm Sunday. The streets were full of tourists. They were also full of cigarette butts, although we did not see many people smoking. The biggest activity, any time, was eating outdoors and drinking wine. Italians consume it like water. We joined in.

You cant see Rome in a day, or four days. We did not go the Vatican and skipped lots of other places. We did get to St. Peters, the colosseum and forum, the Keats-Shelley House the Spanish Steps, Villa Borghese, Maxxi Museum. Moving around was eased by purchasing a Roma card, which gives free access to the metro and buses, and discounts elsewhere. We also walked about a good bit, sometimes dodging the crowds on narrow sidewalks. We were perhaps fortunate to be close to the Fridgedarium with its tasty gelato (long lines). Pizza available everywhere. We had dinner at Alfredo alla Scrofa, near the Piazza Navona. The place gets wildly varying reviews. It is credited with devising fettucine Alfredo, which I duly ordered. Good but pricey. Susan didnt much like her fish dish, so we left with mixed feelings. 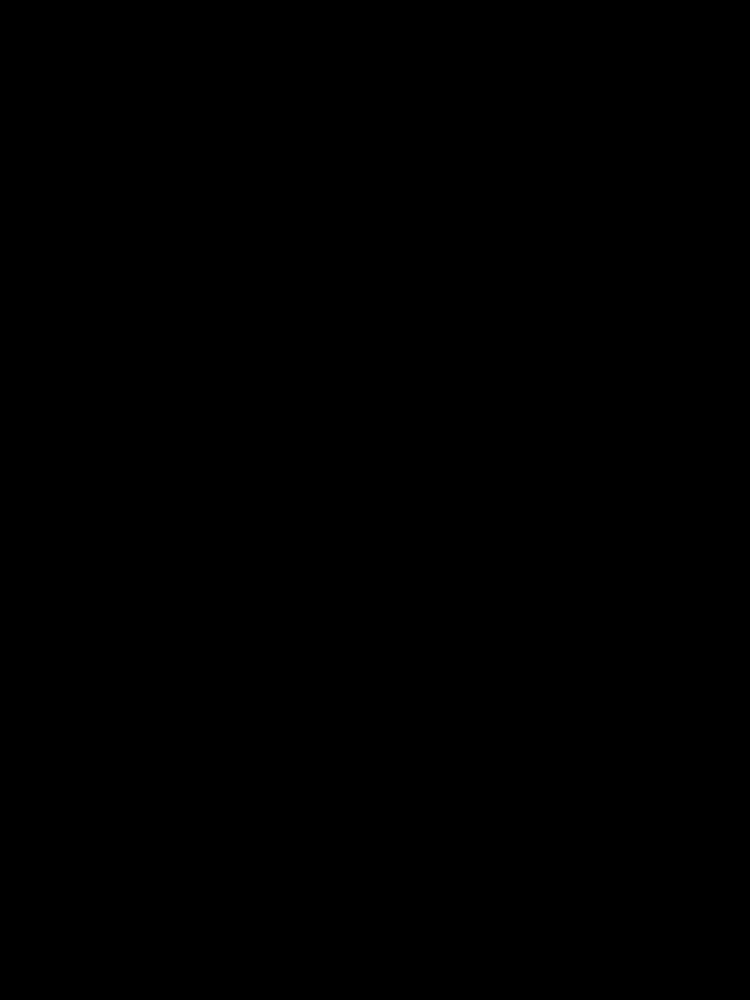 The next dinner was at the home of Bill Halliwell, whom I had met at the Brooklyn climbing gym. He had been living in Rome with his wife and daughter for 18 months, on the Via Dandolo. We started to walk there, guided by the GPS on Susans phone. It led us along many narrow lanes. At one point Susan paused to photograph a man standing with a cat on his shoulder. Then a flight of stairs, and we were getting close. We obeyed directions for another five minutes, without visible progress. Were going around in circles, Susan said.
Just do what the GPS says.
Look, theres the man with the cat again.
Maybe its another man with a different cat.
We reclimbed the stairs and stood around like bewildered tourists. Then we were approached by a young woman from Oregon who was in the country studying the early days of radio. She took us to our destination, five minutes away. The apartment was lovely and the dinner better than the restaurants.

And then for something completely different: our final dinner was a food and wine tour, with some ten stops. Included were the suppli ( rice ball, a very filling Rome specialty) and of course pizza al taglio (by the slice). And various local wines, one of which was provided in a very ancient wine cellar, down several flights of stone stairs. The city is full of monuments many of antiquity and beauty. One that is neither is the hideous Altare della Patria, completed in 1925 and celebrated by Mussolini. It is known locally as the wedding cake or the English dessert. It is enormous and hard to keep out of sight.

Naples is about 116 miles from Rome, but a high-speed train took us there in just an hour. We could learn something from Europes rail network.

We stayed in the Hotel Excelsior; our room was very comfortable but without a view of the nearby sea. The place was an uphill walk from most of what we wanted to see. The Naples card was sold out; we had to navigate public transit all by ourselves. We used funiculars, buses and the Metro, which has some gorgeous stations. The city has lofty points, so the funiculars are especially helpful, except when not running.

Naples provided the only rainy day in our entire three weeks. We bought emergency umbrellas for 5 each. (The euro was worth about $1.10) The seller was an immigrant. We saw few immigrants on the trip. Most were begging or hawking.

One reason to go to Naples is to visit Pompeii and Herculaneum. The train, if its a local, makes many stops and takes about an hour.

We arrived mid-morning in Pompeii to an enormous crowd. It took more than an hour to reach the admissions booth. There was almost no line when we left in the afternoon for the train back to Herculaneum. It is smaller but better preserved than Pompeii. Both were buried by the eruption of Vesuvius in 79 A.D. and only excavated many centuries later. The volcano looms over the area; it stayed quiet when we were there. Both sites are remarkable. But to view many of the artifacts, you must visit the archaeological museum in Naples, and enormous place.

Despite its somewhat unsavory reputation, Naples--at least the parts we saw--was clean and attractive, although the streets were almost as crowded as Romes and had more cigarette butts. There are many outdoor book markets, with good prices. I picked up a copy of Italo Svevos Senilità. Imagine my surprise to find that it was in a foreign language! I have not yet finished it.

We concluded with another food and wine walking tour, more modest than the one in Rome. Then it was time for

and the Sierra Club trip. We flew to Palermo and took a cab to the Hotel Garibaldi, where the group was staying. (In case Sierra Club suggests roughness: all our hotels were 4-star, with bathrooms and usually television, which we never watched.) We met after breakfast the next morning. We were 18 clients: all white American, middle-aged and up (I was of course the oldest), more women than men. It was a compatible bunch: no one was chronically late or cranky. Many were widely travelled. Our leader was Mary Menconi, a Californian. This was the 20th Sierra Club she had led, and she did an excellent job. She was assisted by Dan Pettit, who will be leading a similar trip next spring. We also had an Italian guide, Betta, who was a lot younger than the rest of us. She had lived in Oregon seven years and spoke fluent English with a charming Italian accent: extra vowels at the end of many words. Among the group was a high school classmate, ten years my junior.

The first day we walked around Palermo, Sicilys biggest city (about a million). It is 2700 years old, and some of the buildings show it. As elsewhere, we had a local guide to assist Betta. Guiding rules are very strict--Betta had a license for Sicily and Piedmont (her home) but not for individual cities. The center of the city is its cathedral and Palatine Chapel, with exceptional mosaics. Jewish history.

Next day was our first hike, briefly steep but shorter than its advertised five miles. It took us to a refugio that provided a lunch of antipasto, pasta and ice cream. We had a lot of all these on the trip. Also wine, which Italians drink as we do water.

Sicily was occupied by almost everybody at one time or another--Greeks, Romans, Arabs, Normans etc. This is reflected in the astonishing mosaics in the cathedral of the hill town of Monreale, which was our next stop. We got there on a big, comfortable Spanish bus, driven by Marco; his maneuvers on narrow roads and sharp curves were virtuosic.

Our bus took us farther south. (Our course was a nearly complete circle counter-clockwise from Palermo.) We went to Lo Zingaro, first nature reserve on the island (1981). A four-mile trail traces the nearby Mediterranean shore. The sea was a glittering blue and green. Altitude gain and loss was mild, as was the gradient, most of the time. Small museums punctuated the way. Plenty of flowers and birds, which other people could identify.

Sicily is full of ruins; the Greek ones at Selinunte are arguably the most spectacular. They are very approximately 2500 years old. Earthquakes have toppled them, but some have been partly put back together. The outstanding one is the Temple of Hera, also known as the E temple. The columns are intact, as is some of the facade. No roof. The area temples are the orange of their sandstone, but in the prime were colorful and richly decorated. The site is large, with terrific views of the nearby sea.

Likewise fascinating is the Valley of the Temples in Arigento, which we visited the next day. We stayed three nights nearby, at the Azienda Sanitaria Provinciale. All our accommodations were fine, but this one deserves special mention. It is family-owned, spacious and provided excellent dinners our three nights. Its Bettas favorite.

Soon we had wheeled about into the islands northeast. We skipped Messina, the gateway to the Italian mainland, and took an hours boat road to spend two nights on Lipari, one of the Aeolian Islands. We took a short nature walk with, as everywhere else, great views of the water. Thats the thing about islands.

Next morning a short boat trip to the island of Vulcano. As you might suspect, it has a volcano. Most of the group hiked the 1600 feet to view its crater. The track is wide but obstructed by several erosion channels. There are active fumeroles. Do not stand on them. Amazing views once again.

Then back to the mainland to Taormina. This village is on a hilltop; it is very old, which means that our Spanish bus had to stay below, while we boarded smaller shuttles. It is very old--inhabited even before the arrival of the Greeks in 734 B.C. A lovely place, but an odd choice for the G7 world leaders meeting scheduled for late May. It has an enormous, very old amphitheater.

The Sierra Club venture ended with a farewell dinner in Catania. But we were not quite ready to leave Sicily. With a couple of companions we hired a car to take us to the Islands famous high point, Mount Etna, nearly 11,000 feet. We were driven to a subsidiary crater, but the day was cloudy, so we did not spend 40 each for a gondola to the top.

Finally two relaxing days on our own on Ortygia, the ancient island district of Siracusa. We visited the oldest surviving mikveh (Jewish ritual bath) in Europe. Look here

1) Mafia. In Naples known as the Camorra. Not evident, but certainly present. In Rome we saw an exhibit of horrifying photo graphs by Letizia Battaglia They showed murdered Mafia victims. Some were members, others government agents who had dared oppose them.

2) When to go. April was an excellent time, with mostly clear days and temperatures in the 60s. Summers can be very hot. I cannot imagine the treeless ascent to the Vulcano crater. At one archaeological site Betta told us that all the guides tried to crowd their summer groups beneath one of he very few shade trees.

3) Poverty: There is a doubtless a lot inland, where we did not go. The immigrant population tends to arrive on the mainland.

4) It is my custom to forget at least one important item per trip. This time it was underwear. Should you need to know, the Italian for underpants is mutande.

5) Store signs were often bi-lingual, the second language being English.

6) Dinners. Except as noted, in restaurants, not hotels. Sometimes very big. For example: 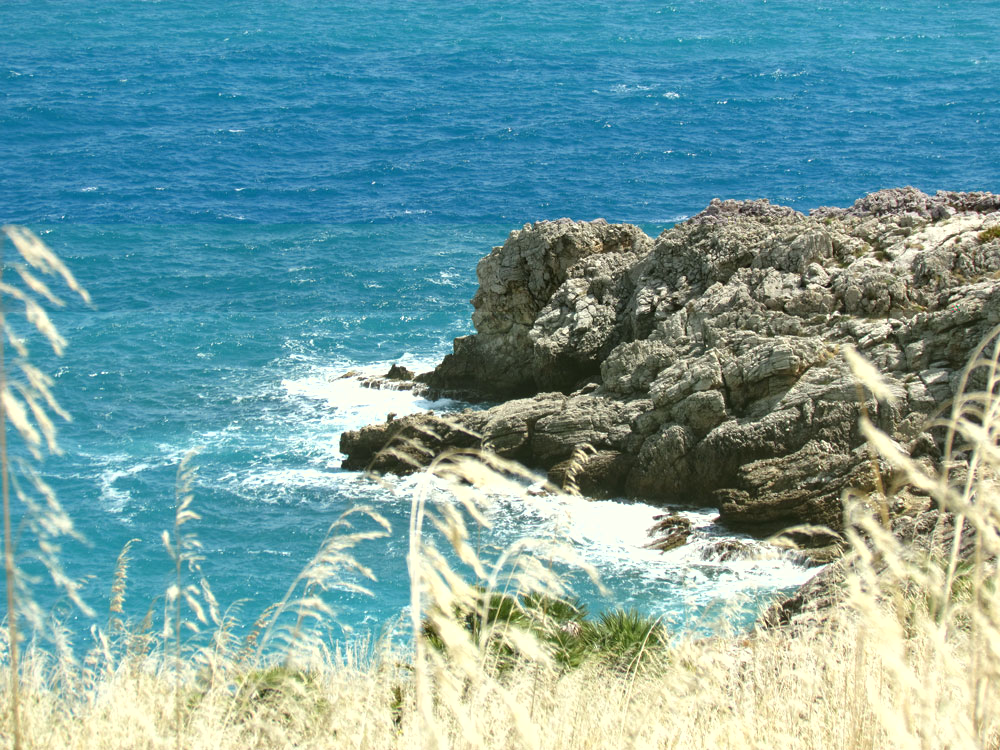 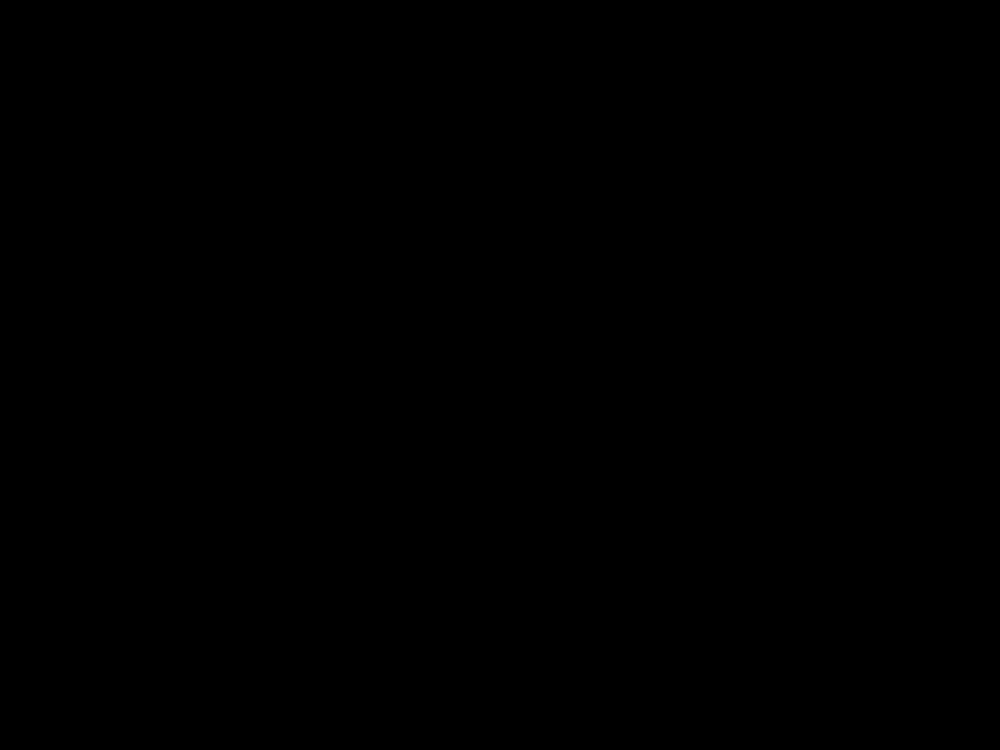 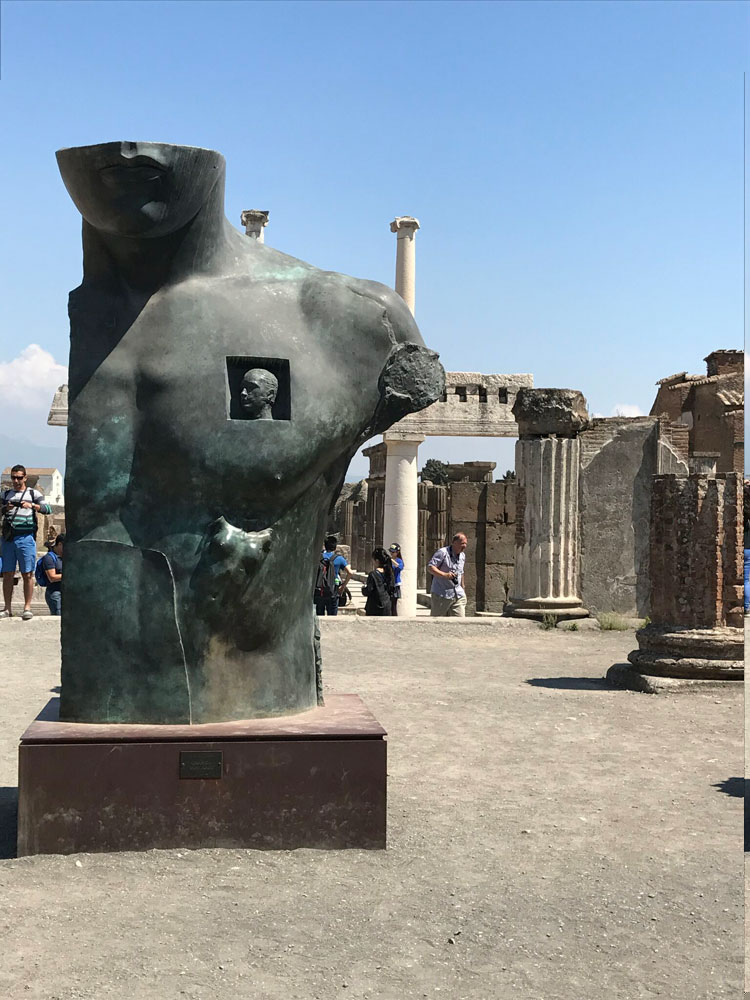 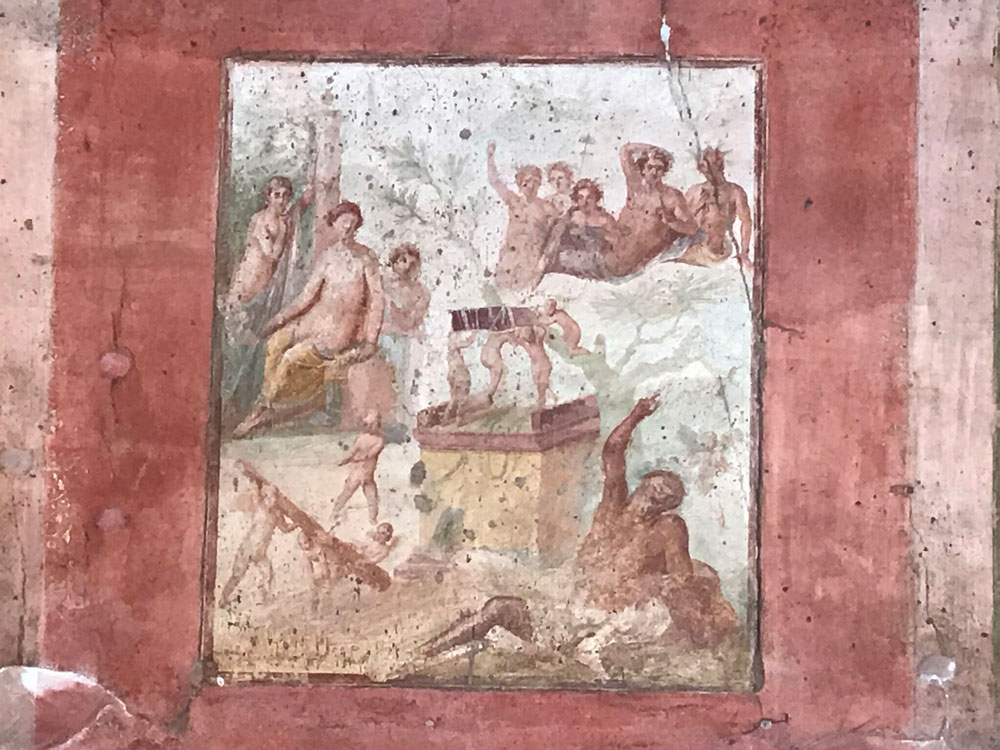 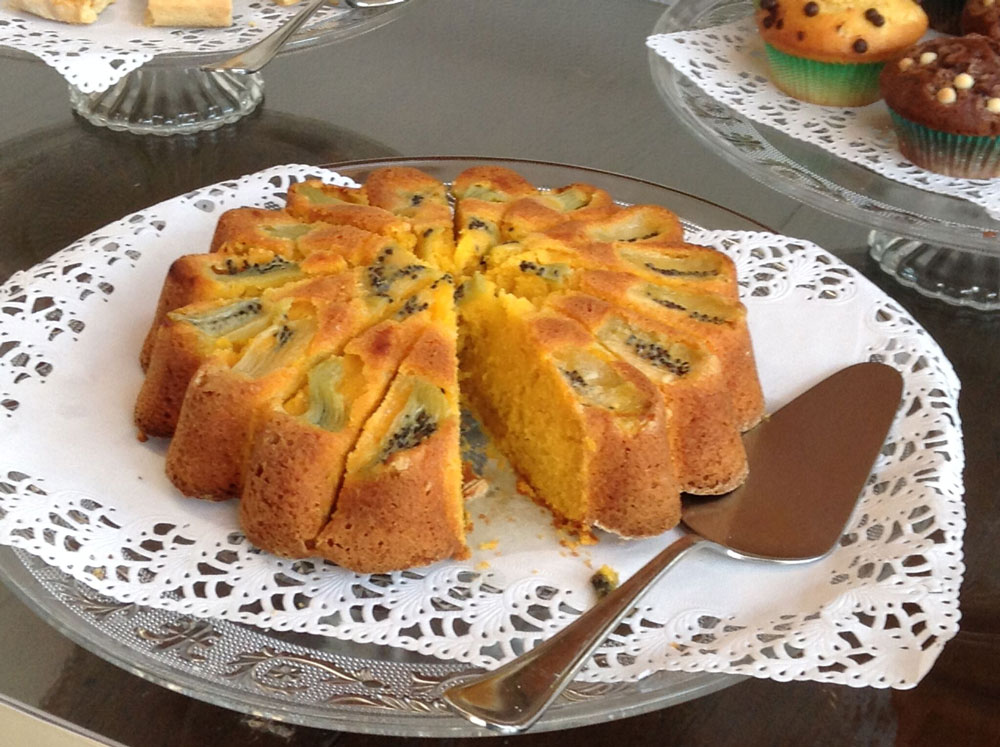 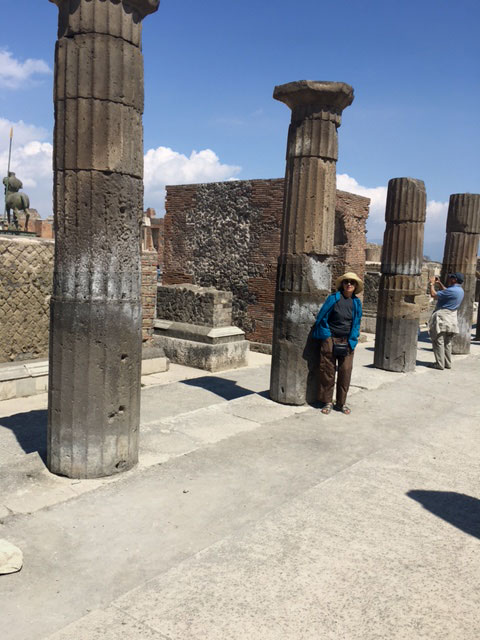 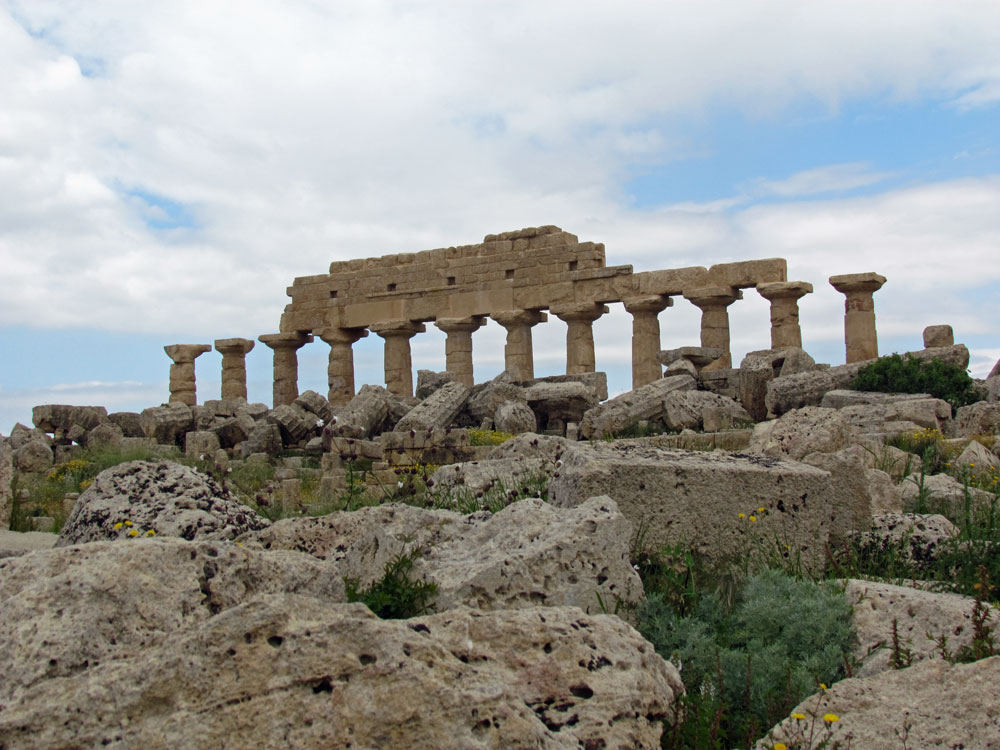 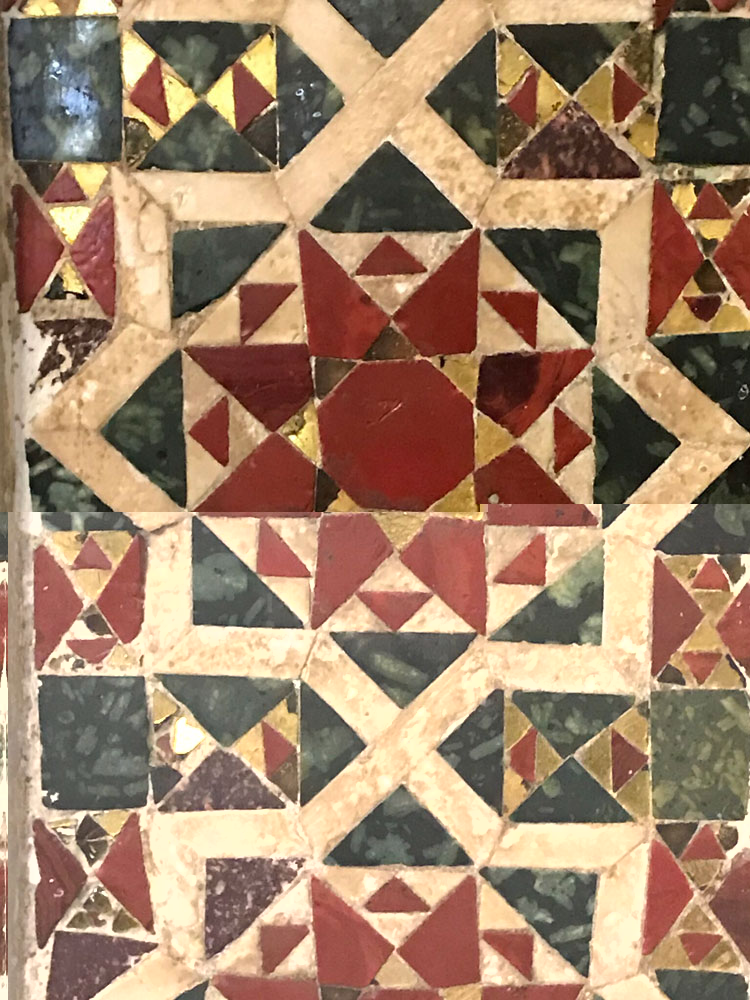 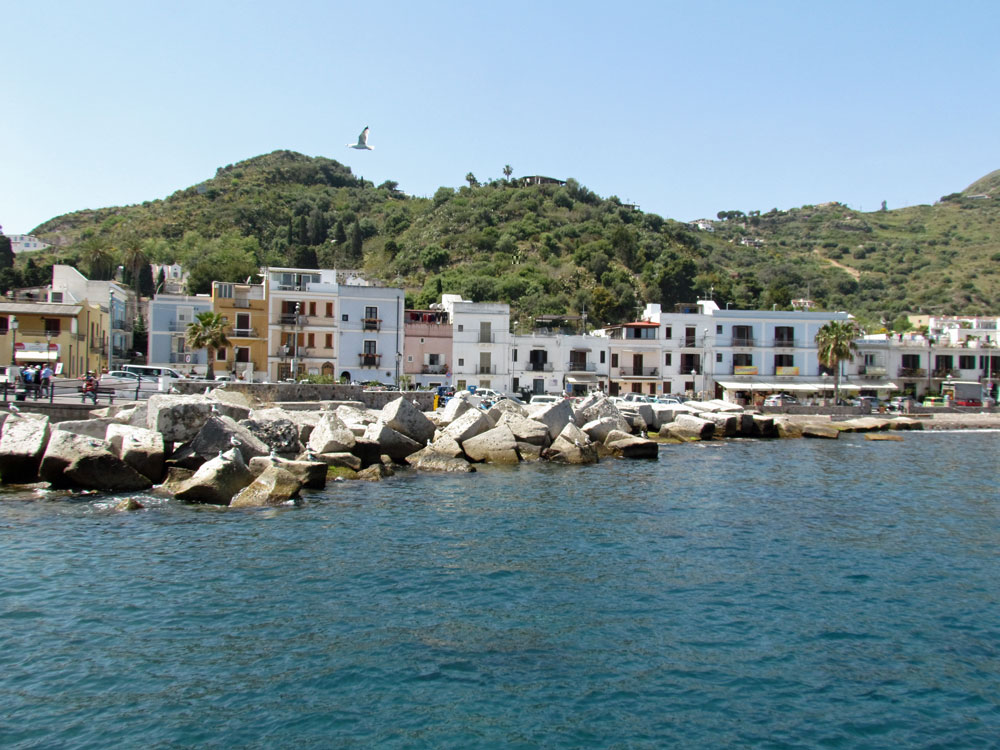 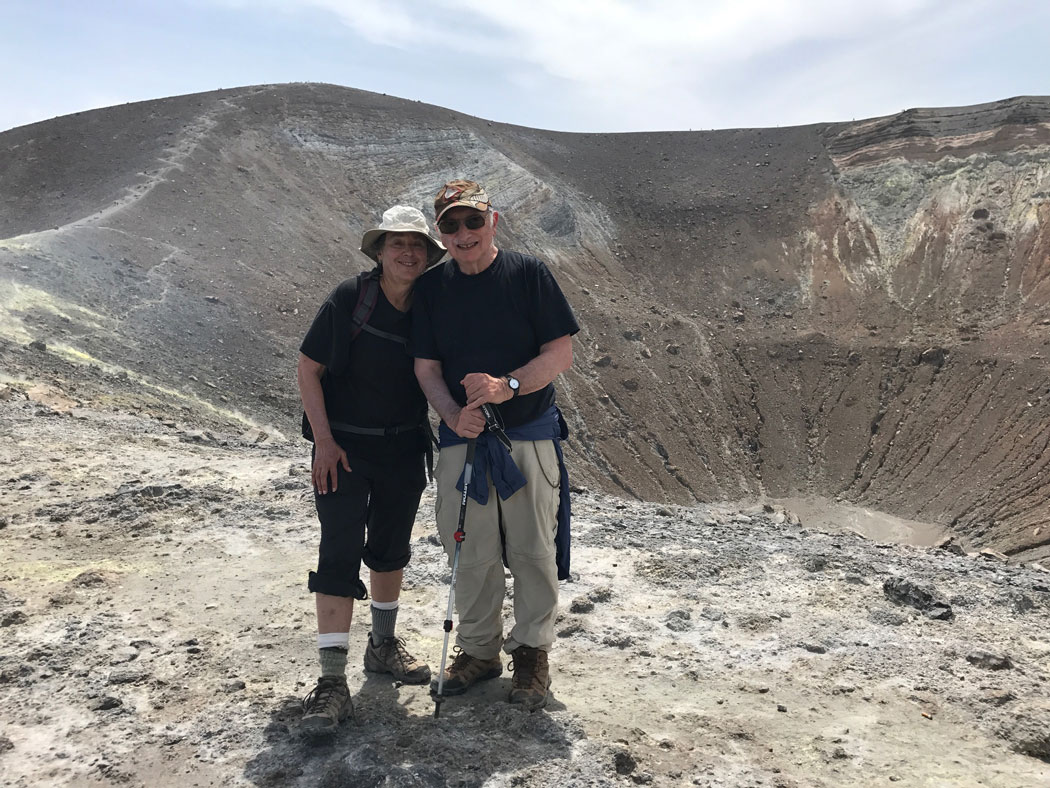