Now that I am in my mid-seventies and have been climbing in the Gunks more than 60 years, I feel entitled to be a bit cranky about the scene. But Ill begin with my local climbing gym, Brooklyn Boulders. Its about a mile from my home. There used to be a handy public bus, but it has been canceled--no doubt to encourage walking. When it opened about five years ago, the gym was the biggest such in New York City: 22,000 square feet. It has many bouldering walls, even a bouldering ceiling, lots of top-roping routes and some leader ones as well. The routes are re-set regularly and imaginatively. Thats the good part.

But of course I find plenty to gripe about. On weekends and weekday evenings the place is a mob scene. Worse: half the climbers are less than 10 years old--some a lot less. Worse still: most of them climb better than I do. I have contributed to this by bringing my 6-year-old grandson. Makes me wish I was again four feet tall and weighed 60 pounds. Of course there are some holds that the kids cannot reach. That gives me some comfort. Not that all these folks, big or small, are really climbing. Many are just hanging out, or playing ping-pong or trying to balance across a tight horizontal rope. Some dont even pretend to be climbing: they are kids celebrating another kids birthday.

I am amazed at the number of adults who dont wear harnesses--all they do is boulder. Which brings me to the Shawangunks. In the old days we did the climbing routes, all the way to the top, and left the boulders in peace. (Not that I wish to appear nostalgic. There were problems back then too.) Now those rocks along the carriage road have their own guidebook. It is a rare day that does not find packs of boulderers with their crash pads (see photo).

Not that there is anything wrong with tackling those boulders, if you have the right fingers and arms (I do not). No harm. But let me say a few curmudgeonly words about chalk. It is supposed to dry out the fingers and thus improve ones grip on those tiny holds. Perhaps. But it has the side effect of whitening the holds and providing directions better than any guidebook. We have all been grateful for such help at one time or another. Especially gym climbers, who may miss those colored tapes marking the plastic holds. I think that the strength of chalk is almost entirely psychological. But I wouldnt know. I never use the stuff.

What happens when all those gym rats tackle real climbs--on actual rock, without the comfort of a top rope? Back when, you could clip in to pitons, which stayed sturdily in the rock. Most of those pitons have rusted out or been removed. You place your own protection or do without. Some gym climbers make the transition easily; others are intimidated and climb well beneath their abilities. Perhaps someday the cliffs themselves will be turned into a climbing gym. This alarming prospect is described in Alpinist magazine, 40. Its also on my web site.

Enough complaints for one issue. But I have lots more. Just wait.

Phalanx of boulderers march along the carriage road, 2010: 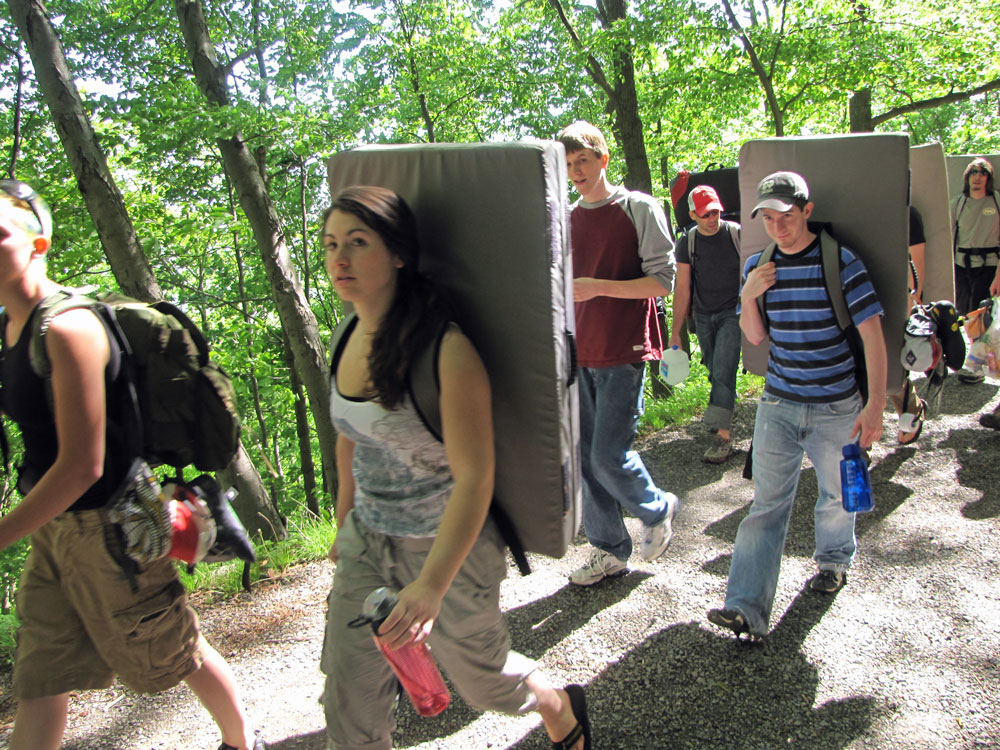