Ever since, at age about 8, I had seen a cover photograph of Devils Tower in Natural History Magazine, I had been entranced and frightened by this strange formation rising a thousand feet off the plain. I was too young to imagine that I would ever climb it.

In 1954 Mike Wortis, Steve Mann and I were driving east from the Tetons. We had been high school classmates--Mike and Steve headed for college, I a year behind.

The Tower had been climbed a number of times, but local officials were known routinely to deny permission. Nevertheless the morning after we arrived, we decided to inquire, just in case...

You want to climb it today? they asked.

We swallowed our amazement and said the next day would be just fine.

There were only two well-known Tower routes at that time: Fritz Wiessners 1937 crack and Jack Durrances Leaning Column: from the following year. Wiessner had gone some 60 feet up the difficult crack without placing a single piton. I think his route was still unrepeated. So we headed for Durrances column.

We knew there were two serious pitches: the broken column and a wide crack above. We drew straws for leading. Mike got the column, I the crack. The leaning column, a distinctive and I think unique feature of the Tower, proved unexpectedly balancey, and I was glad of Mikes top rope. As for my pitch: it was much longer, but presented no route-finding problems. Your right foot goes into the gap between the column and the wall, while there is a serendipitous crack a few feet left for the other foot. If you need their guidance, there are (at least, were) a number of pitons. The only trouble is on the last 15 feet of the pitch, when the space between the crack and gap becomes too great to bridge. The pitch is now graded 5.6+, which was pretty challenging for kids like us.

From here on, its little more than a scramble to the huge, nearly flat summit.

When we got down, early afternoon, clanking with hardware, some tourists took our picture. For ten minutes, we felt like heroes.

I had written a giant postcard to my parents, with a photo of the Tower on which I marked our route. My mother was glad that I didnt send it until we had come down safe.

Two years later Mike and I returned with Dave Toland. We climbed an aid route several columns right of the Durrance, using cheesy pitons left by the army troops who had been practicing there.

Afterwards we ran into Jim McCarthy, who was to create a number of routes on the Towers longer and harder north side. His presence was a sign of change. As of a few years ago, 4000 people reached the top of the tower. Our 1954 ascent had been only the 41st. 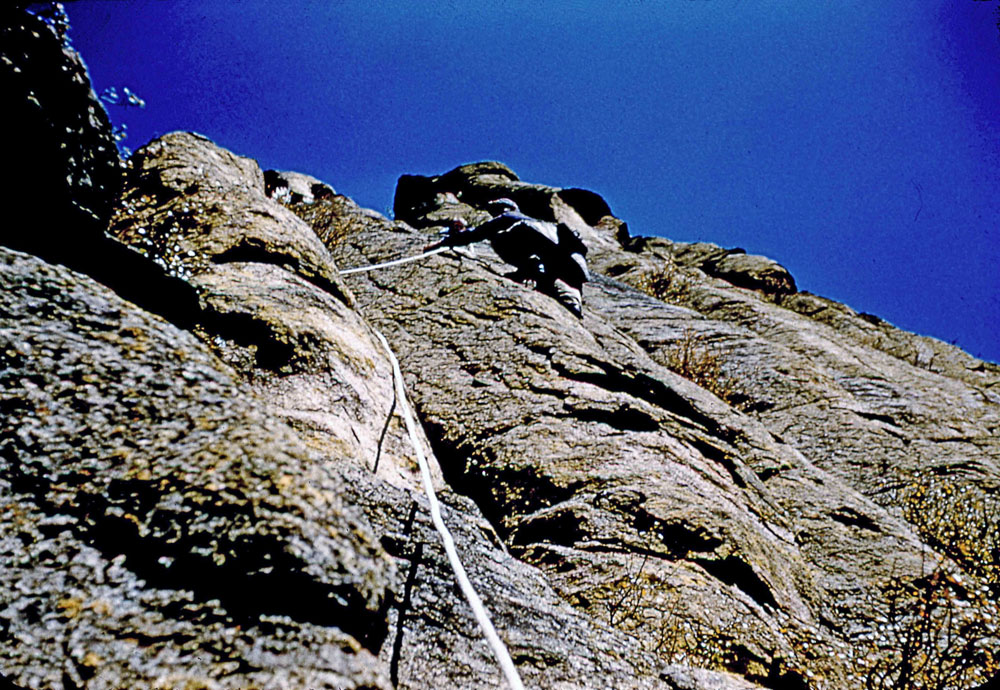