I came across a copy recently (May 2016). Heres a brief personal description of some of the names that I found.

Helen Buck: Elderly and past her climbing days, she was the long-time librarian at the American Alpine Club on east 90th street in Manhattan.

Frank Cary: An unlimited leader, middle aged. Seldom seen until he left the army, and not a whole lot thereafter.

Ted and Ann Church: Ted was one of the strongest leaders. His relations with Club leaders were tenuous. Ann, his first wife, was a strong climber, sometimes paired with Krist Raubenheimer.

John Coggeshall: A true gentleman climber. Wrote a prescient letter about the impending popularity of Gunks climbing, then still dominated by the NY Chapter of the AMC.

Lawrence and Marguerite Coveney: Real old-timers. I never met them. Lawrence followed Fritz Wiessner on his daring ascent of Devils Tower in 1957.

Henry and Harriet Deleuran: Another climbing couple, of modest ambition.

Oskar Dorfmann: Painter of marvelous climbing cartoons. I met him in 1953 on a guided ascent of the Southwest Ridge of Symmetry Spire with Leigh Ortenburger. He claimed to be a friend of Hans Kraus, but Hans just laughed about this stranger whom I wanted to bring into the Club.

George Evans: My climbing partner in the Tetons in 1954. A very steady climber, he died in an unexplained fall on the east face of Mt. Whitney in 1982*.

Herb Evans: Georges father. He was the one who shouted at me when I was leading Frogshead, as noted in my Appalachia memoir.

Lester Germer: Loved to lead people up climbs. On tenuous terms with Club leadership because he tended to ignore the rules.

Bob Graef: An engineer with Sperry. Very active in the 50s.

Richard Hirschland: Part of the Hans Kraus group. An able though not graceful climber.

Ruth P. Hirschland: Known as Bonnie Prudden after she split from her husband, Dick (see above). Established important new routes. Stopped climbing many years before her death, age 97.

Herman(n) Hoerlin: an anti-Nazi German who managed to come to the United States in 1938. He had gone to Kangchenjunga with an international expedition in 1930. You can read about him in Steps of Courage (2011), by his daughter, Bettina Hoerlin. He was a high-altitude physicist; by 1955 he had moved to Los Alamos.

Harold Holbrook: This was before he became Mark Twain. When he told me he was appearing in a daytime soap, I made sure to catch an episode. Harold, his very good account of his early years, does not mention his climbs in the Shawangunks.

John Humphreys: Very active in the Harvard Mountaineering Club. Climbed in the Karakoram. Died young in crash of commercial airliner.

Steven Jervis: I was still a junior member at this time. Status didnt change until you turned 23.

Robert Jones: Longtime employee of Perkin Elmer, Chief Engineer on the Hubble Optical Telescope Assembly. He led the hard pitch on Bugaboo Spire without a piton.

Doug Kerr: Exceptionally strong. In addition to Dougs Roof, he was responsible for starting Broken Sling at the Nears. It was his sling that hung on this then unfinished route for many years. Climbed in the Tetons and Alaska.

Hans Kraus: Leading Gunks climber of the time. Very bold and strong. Pioneered more routes than anyone else in his day. Used aid extensively.

Nicholas Lachno: Of Greek descent. I recall climbing RMC with him in heavy rain.

Robert Larsen: Bob is still going at 91. Lives in Gunks area. Co-author of An Unforgiving Land, a history of early Shawangunks settlement.

Gerald and Winifred Laubach: His wife taught at Fieldston when I was a student there.

Ralph Longsworth: Only a few years older than me.

Maria Leiper (Millar): Made hard early routes with Fritz Wiessner. She worked in publishing and was one of the first to see the merits of Nabokovs Lolita.

Ralph Longsworth: Only a few years older than me. Very able.

Jim McCarthy: Not in the address book, but by this time the boldest climber in the Gunks. He raised standards--a lot. Richardt and Marianne Marquardt: He was an airline pilot, so allowed on leaders weekends when he had time off, though he led little, if at all.

Lilli Meissinger: A real innocent. When Norton Smithe asked who she thought was the most beautiful woman in the world, she said, Queen Elizabeth.

David Millar: Marias husband. He let her do most of the leading.

Percy and Marjorie Olton: Drove me up for my first weekend, early April, 1952. Very active in NY chapter. Had done significant climbs in he 1930s in Wyoming and Alaska.

Wallace and Kristin Raubenheimer: Wally was my first roommate at Schlueters. I thought he was 16, but he was ten years older. Within a few years he had met and married Krist Johnson, who established several new routs in the Trapps.

Ian Ross: Not in the book, but history demands this note: He was at Bell Labs. Followed Bill Shockley on Shockleys Without; Bill later returned with Doug Kerr and did the famous ceiling.

George Smith: Took me on my first climb--Minty, in the rain. A big, genial man, he posed for a Hathaway shirts ad that appeared in the New Yorker.

F. Norton Smithe: Inventor and manufacturer of the very solid Smithe angle pitons, which adorned the cliffs for years. A strong climber and a wonderful man; he died much too early in a boating accident.

Mary Sylvander: In her forties. Her husband, My Lord and Master Hjalmar, never appeared, although he did exist. Mary and I followed Willie Unsoeld on the first complete ascent of the Jensen Ridge on Symmetry Spire, in the Tetons.

Ruth (Lantner) Tallan and Harris Tallan: Another climbing couple in which the wife was stronger.

Barend(Barney) and Maria Toerien: He was tall. She was short and the better climber. Once she repeated her lead of the top overhang on Layback because she thought she had not done it right the first time.

Janice Whipple: Went to the Wind Rivers with a bunch of us Appies in 1955.

Roger Wolcott: Portly, with gray hair and moustache, he looked like Colonel Blimp. He was nevertheless quite a capable climber, who had been with Hans Kraus in the Wind Rivers.

Michael Wortis: My climbing partner in high school, college and beyond. He now lives in Vancouver, where there are plenty of hiking trails, plus ocean on which to kayak. 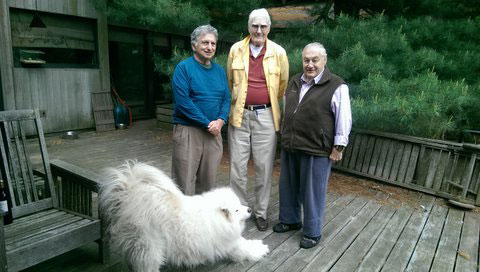